Newton Emerson: Arlene Foster burns in fire of own making

December 19th, 2016: Non-DUP members of the Northern Ireland Assembly walk out of the chamber before First Minister Arlene Foster explains her role in the renewable heat incentive scheme 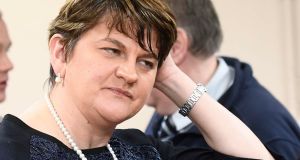 Stormont is not important enough to witness Shakespearian tragedies.

In terms of Elizabethan playwrights it is more like Christopher Marlowe, stabbed in a pub while fighting over the bill.

On that scale, however, Arlene Foster is on a tragic course. Within months of becoming DUP leader, First Minister and an election poll-topper, she looks permanently damaged by a green energy scheme botched years ago under her remit. The fallout is destroying individuals and institutions around her – and so much of it seems due to Foster’s character, which leaves her unable to take or share responsibility, to be civil under pressure or to recognise her limitations.

By the time she made a straightforward and semi-contrite statement to the assembly yesterday, it was too late. Her earlier contempt for Sinn Féin had caused a mess so catastrophic that both executive parties together could not untangle it, while the speaker compromised his own office trying to defend it. In unprecedented scenes, everyone but the DUP walked out while Foster delivered her remarks, her authority draining away.

There is a brutally simple explanation for what went wrong with the renewable heat incentive (RHI) scheme, and it has already been made official in an independent report. The RHI’s problem is that the subsidy it pays for wood pellets is more than they cost, meaning people can make money wasting energy.

Stormont caused this by removing a subsidy cap when RHI was adapted from an identical scheme in Britain.

In June this year, a report from the Northern Ireland Audit Office found the cap was removed due to a mistake in a 2011 consultant’s report, which “appears to have been copied without thought”.

Notwithstanding the wood-fired free for all that has taken place since, this one cut-and-paste error is the original sin.

Foster was minister at the Department of Enterprise, Trade and Investment when this happened and for four years afterwards. If she had been able to admit her role promptly and with some semblance of humility, she might already have put the matter behind her.

Instead, there were frantic efforts to quietly shut the scheme down from late 2015, once its fatal flaw was noticed. Foster was no longer department minister by then and blame was laid at the feet of her DUP successor, Jonathan Bell.

But the RHI mistake was not a one-off under Foster’s watch, nor was it some obscure little corner of her empire.

Most of the department’s budget and remit were delegated to a single quango, Invest NI, which was also sharply criticised by the audit office during Foster’s record-breaking seven-year tenure. Now we know she was also asleep at the wheel throughout a flagship in-house project. If she was not on top of policy or detail, what was she doing?

In October this year, the RHI story exploded after the assembly’s public accounts committee exposed its true cost: £400 million to Stormont – three times that to the UK taxpayer overall.

Foster’s first reaction was to insist she could not have known “every jot and tittle”, despite just penning an online tribute to her leadership that began with the words “detail is important”.

As questions mounted, she blamed her civil servants, the assembly’s department scrutiny committee, other parties, her advisers – anyone but herself.

Last week, Bell got his version in first, before he was also thrown under the bus.

Foster’s rebuttal to Bell’s BBC interview was typically tetchy and bizarrely ill-considered – she had not heard his comments before giving hers.

She also played the gender card, claiming Bell had bullied her and other women. This was quickly finessed once Bell threatened to sue, with bullying allegations also sourced from men.

What happened to the First Minister of a few months before, proud to have risen to the top without tokenism?

After Bell’s interview, the SDLP moved a motion of no confidence in Foster, placing Sinn Féin in the invidious position of having to condemn its coalition partner.

So Martin McGuinness offered a compromise – Foster should step aside for a few weeks ahead of interim findings from the inevitable inquiry.

There is a mechanism for doing this and it is not so unusual as to be utterly humiliating. McGuinness has availed of it, as did previous DUP first minister Peter Robinson.

Foster replied that she would not “take orders” from Sinn Féin.

This was no calculated insult. The DUP is so arrogant it seemed genuinely oblivious to the joint nature of Foster’s office.

Once Sinn Féin pointed that out, however, and warned of “grave consequences” if it was ignored, Foster pressed on regardless.

Her calculation was presumably that Sinn Féin would not collapse the executive – its only procedural option – so she would stand her ground and everyone else would just have to sit and listen to her.

After the DUP speaker tried to justify this, entirely unsuccessful, the chamber emptied as Foster rose. It seemed that all her faults had concertinaed over a week into this moment of calamity, which was always going to come.

1 Germany to declare Dublin a Covid-19 risk area due to high number of coronavirus cases
2 The pick of the Dublin restaurant meals to go
3 Covid-19 infection rate falls in Dublin for first time in two weeks
4 Let coronavirus spread through under-60 population, Dáil committee told
5 Dublin ‘could go to Level 4 or Level 5’ if cases continue to rise
Real news has value SUBSCRIBE