‘It’s not all about money or funding: it’s about honesty, courage, planning, vision and political will’ 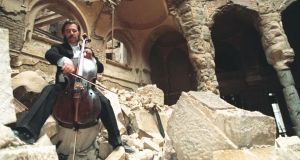 ‘A truly international series of concerts in Croke Park and around the country with artists such as Daniel Barenboim and the West-Eastern Divan Orchestra, Vedran Smailovic (above) and the Trans-Siberian Orchestra and a rich mix of Irish and “world” music, literature and visual image would show that Ireland is no insular, introspective island on the edge of Europe but an open-minded, creative force for true independence of spirit and action.’ Photograph: EVSTAFIEV/AFP/Getty Images

A cellist stands in the midst of war and plays music to mourn the dead and defy the killers. A historic handshake between a former IRA leader and the British queen takes place in a poets’ theatre in Belfast, one of the safe spaces that art can make.

In the Clinton Centre in Enniskillen, close to the site of the poppy day bomb attack in 1987 a young artist works through the night to paint a haunting, powerful image on the interior gable wall: a huge hawthorn tree with a deer trapped in its branches. The artist, Miriam de Burca hears tapping from the other side of the wall, works on, hears it again – it’s three or four in the morning. She asks a manager if the place is haunted. No, he says, but the wall is built on the place where people killed and injured in the bomb blast lay trapped under rubble.

Art can hold an essence of life, may summon hidden pulses from the past and what we call history; it has an immeasurable power and the extent to which a society or state supports and fosters artistic and cultural expression is an acute measure of that society’s core values.

The cellist who played in the ruins of Sarajevo in the early 1990s is Vedran Smailovic who now lives in Warrenpoint, Co Down. He performed at a recent event to mark the 20th anniversary of the setting up of the Irish World Academy of Music and Dance at the University of Limerick, and that music was one of the most eloquent moments in a fascinating and passionate discussion of art, society, citizenship and commemoration.

Vedran loves living in Ireland, and when I ask him why he chose to move from Bosnia to Northern Ireland he laughs and says “some of us need slow change”.

The weekend events in Limerick were entitled “Between the Poetic and the Practical” and that phrase seems an apt summary of the challenges facing us as we look to the centenary of the 1916 rebellion: are artists, in particular, caught between a rock and a poetic place as they consider how we remember, honour, question and commemorate acts of history which are fraught with conflict, contradiction and potential controversy?

Art curator Helen Carey made a pertinent point in Limerick: any artistic response to the political commemorations in Ireland in these coming years must leave room to express grief and loss, and explore terrains of pain and suffering, as well as honouring past events and people.

This is a hard balance to achieve: a rightful remembering of brave people who were prepared to die and kill in pursuit of a legitimate and honourable goal, and the thousands of people who were injured, killed, displaced, terrorised and traumatised by war and conflict; a celebration of the best of the ideals held by the rebels and articulated in the Declaration of Independence, and a mature recognition of the failed politics and betrayed ideals that have marked so much of post-independence Ireland. Landscape of splendour and loss

Perhaps it is only art that can express or explore this landscape of splendour and loss, of hope betrayed, of death, celebration and regrowth. The State must put on its official face and uniform and march out to parade and perhaps fire symbolic volleys on O’Connell Street. Gardens of Remembrance with seven symbolic trees will be planted around the country and the world. But it is the stubborn, subversive, eccentric vision of writers, painters and musicians that will create, in the words of Paul Muldoon “the small translucent fruit” of art from the twisted ruins of history.

The revolution in Ireland from 1916 to 1922 was an inspiration to independence movements in India, Vietnam and many parts of Africa. In honouring it, let’s look out to the wider world as we mark this centenary and seek to articulate the passionate power of art to make connections across religion, politics, prejudice and fatal borders like the new European frontiers that see thousands of refugees drown in the Mediterranean as they seek a better life in the lands of plenty.

A truly international series of concerts in Croke Park and around the country with artists such as Daniel Barenboim and the West-Eastern Divan Orchestra, Vedran Smailovic and the Trans-Siberian Orchestra and a rich mix of Irish and “world” music, literature and visual image would show that Ireland is no insular, introspective island on the edge of Europe but an open-minded, creative force for true independence of spirit and action. The name of Ireland was often a synonym for creative, rebellious independence of spirit: perhaps artists can work to ensure this spirit is renewed in the present. ‘Question everything’

One of the best ways to honour past and future is through support, acknowledgment and funding for innovative work in the present. So let us all make a greater effort to travel to Louth to hear the remarkable concerts put on by Louth Contemporary Music Society; to support the arts and artists of Limerick post-City of Culture; to lobby for a permanent “Troubles” art gallery in Derry or Belfast; to “question everything” as Eileen Gray recommended all artists do before they get down to creative work.

Vincent Woods is a writer and broadcaster. He presents Arts Tonight on RTÉ Radio 1 and will edit Poetry and the Great Hunger as part of the Folio series for the Great Hunger Museum at Quinnipiac University in Connecticut, to be published in 2016. Email vwoods@eircom.net.