Commemorating 1916: How much does the integrity of the past count?

‘In its own peculiar way, Ireland Inspires quite eloquently expresses the gap between history and commemoration’ 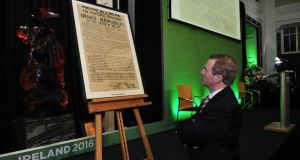 Contested past: Taoiseach Enda Kenny looks up at the 1916 Proclamation in the GPO at Ireland 2016 launch in November. Photograph: Aidan Crawley

A little more than a month after its release, Ireland Inspires, the video marking the launch of the State’s programme of commemorations for the Easter Rising centenary, has already disappeared. It probably does not even merit the attention it has already got, but the video itself and some of the responses to it have exposed some thorny knots.

Diarmaid Ferriter, one of Ireland’s most prominent historians, has dismissed it as “embarrassing, unhistorical shit”. There was too much of the hamfisted here and now about it, and far too little of 1916. It might have passed muster as a project led by tourism, by enterprise and employment, but this was supposed to be about history, wasn’t it? There were clearly expectations that something more recognisably historical should be involved, at least some black-and-white photographs, some familiar names, some famous faces. It was supposed to be about commemoration of the past after all.

But when has commemoration ever truly been about history? The memorial events for the 50th anniversary of the Easter Rising told us more about 1966 than they did about 1916, and 2016’s efforts are not likely to be different.

Commemoration does not have to be historical or unhistorical; it operates on a different register and, in its own peculiar way, Ireland Inspires quite eloquently expresses the gap between history and commemoration.

Much of the rhetoric that has already accompanied the commemorations of the 1912-23 period has emphasised a very particular contemporary agenda. Our shared history, North and South, British and Irish, has been stressed in all sorts of obvious and contorted ways. Before the period of centenaries has even begun, we have been reminded to be mindful, respectful of other views, conscious of all-island perspectives.

In 2011 the Government announced that steps were being taken “to properly commemorate the centenary of the great events of 1916”. The implication was that there was an improper way and the Government could not risk the past falling into what it considered the wrong hands.

The Government knows it has to mark 1916, not just as part of a wider commemoration of the first World War, even though the history of the Rising increasingly understands itself that way, but as a separate set of perhaps triumphal great events. It wants to do it; it has to do it. If nothing else, perhaps the morale of the country needs it to do it, but the Government seems desperately unsure how to. The Northern Troubles always made the Rising difficult for Irish governments to commemorate, but now different troubles make it just as hard. Peace, emigration, austerity: commemoration comes with the burden of many contemporary things.

In some respects, it is almost too easy to take the political use of the past to task. Politicians who use the past to justify their present actions are probably just good politicians. Their job is to get re-elected, to keep the peace and, if the past works just as well as promises on the economy, on education, on anything and everything else, then so be it. Politicians in most countries do it and, as in everything else, some are far better at it than others.

Historians are almost always at odds with this agenda, making the past more complex, bringing more aspects to light, challenging the assumptions that make the past easy for any cause to bluntly wield. Yet historians still benefit from the crumbs at the commemorative table.

The Government’s plans for capital projects, including new premises for the Military Archives, will allow more research to be done, will fuel the public appetite for this past. But the challenge for the historian is to get beyond contemporary agendas, to write as openly as possible about our wars among ourselves without feeling any other obligation.

Seeking out shared traditions only makes sense in the context of examining the hatreds and the bigotries, the silences and the disconnections, that countered them. Looking at them in isolation is like praising the stitching without admitting there was ever a tear.

That said, these could be seen as quite smug statements to make from the historian’s remove. For those who have a responsibility for the security of the present, how much does or should the integrity of the past count? Are the reckonings of old wrongs any more or less important than resolving grievances now? Are there certain things in the past that we still just do not need or want to know?

The danger of focusing on a shared history is the assumption, or maybe just the implication, that the past can somehow fix us, or at least contribute to our improvement. And the more historians work with the records of the period, the more they know it can never be as simple as that.

Part of the reason Ireland Inspires was greeted with such derision was because it just did not inspire. It did not appeal to the sense of pride in the past that we construct for ourselves from snatches of schoolbook facts and family remembrances.

We all have some sort of pride in a version of the past that swells our chests and sets our pulses racing to the beat of an anthem and, whatever comes of commemoration in 2016, both politician and historian might be mindful of that.

1 Normal People: Full-frontal nudity was not its most radical feature
2 ‘Frustrated and angry’: Thousands march in Dublin to protest death of George Floyd
3 Should my mam wait for house prices to drop before buying?
4 Covid-19: Easing of restrictions ‘unlikely’ to be speeded-up
5 Coronavirus: One more death in Republic as expert warns house parties are ‘disaster’ for containment
Real news has value SUBSCRIBE