‘It is a very Catholic banking inquiry, a kind of confessional for politicians, bankers and civil servants’ 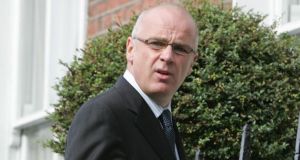 For Drumm’s claims in his statement that Brian Cowen erred when the former taoiseach said that the two men had not in 2008 discussed banking details has already been well aired in the media.

Either Drumm or Cowen has to be wrong, but the inquiry cannot decide between their accounts. It has neither the power nor the ability to do so.

That Drumm, a fugitive from possible criminal charges in Ireland, can escape accounting for his claims in person as other witnesses must makes a mockery of this State’s response to a banking collapse that cost us more than €60 billion.

The conflict of evidence is an open wound that will bleed dry the findings of the inquiry. It is a contradiction going to the heart of what was always a weak and belated exercise.

The inquiry has five main flaws.

1In setting it up, the Oireachtas failed to take into account sufficiently the findings of earlier reports on the banking collapse.

These included The Irish Banking Crisis, Regulatory and Financial Stability Policy 2003-2008 by Central Bank governor Patrick Honohan (2010); The Preliminary Report on the Sources of Ireland’s Banking Crisis by Regling and Watson (2010); the capacity review of the Department of Finance (2010); Peter Nyberg’s work for the government entitled Misjudging Risk: Causes of the Systemic Banking Crisis in Ireland: Report of the Commission of Investigation into the Banking Sector in Ireland (March 2011).

How many deputies then studied those reports, which describe clearly how regulation failed? On banking reform, by 2015, the inquiry is largely reinventing the wheel.

2The inquiry’s approach to the infamous “night of the guarantee” is theatrical. It was clear long ago that the government of 2008, partly through its own ineptitude, faced a classic “lesser of two evils” choice. The fact that ministers and officials differed on details was unremarkable. With the inquiry’s report due in November, it will be hard pressed to say what it adds significantly to what was already known about that night.

3Because of its terms of reference, the inquiry cannot explain where billions went that banks lent recklessly, and that the State replaced in their vaults at enormous cost to Irish people in health, education, social services and job- creation.

During 2011, as a communications academic, I wrote to party leaders and all deputies proposing an official report on who got the main loans originally lost by the Irish banks, on what terms they got them and subject to what supervision, and on where those billions now are. Someone has all that money, later replaced by taxpayers.

I did so because a clear narrative of what had occurred and who benefited is crucial to rebuilding trust in the political system.

Most deputies did not bother to reply. A few were enthusiastic about the idea. But there has been no such inquiry.

Yet disturbing questions remain about those original loans. Treating such matters as private and confidential in the context of a disastrous crisis is reckless. Questions now arising, about how the National Asset Management Agency does business, highlight that earlier need to know. Twice bitten, shame on who?

Recent court cases have also revealed how some money was moved about once the banks lent it. In the absence of strict conditions, how many billions were – even by means of legal and tax-compliant transfers from one jurisdiction to another for related companies – put out of reach of later recovery?

And in the recent controversy over terms on which the Irish Bank Resolution Corporation dealt with businessman Denis O’Brien, it would have helped deputies to know what if any favourable terms had banks before the crash afforded to special clients. Any such terms may have made it harder for the IBRC to charge higher interest when keeping companies afloat after the crash.

4 The inquiry is too much like business as usual at the Oireachtas, with Ministers used to spending public money easily on professional and consultancy services. Its costs, not including the salaries of deputies and senators devoting their time to it, is already approaching €4 million. To many small businesses and families shell-shocked by the recession, that is a lot of money. What material benefit will result?

5 It is a very Catholic banking inquiry, a kind of confessional for politicians, bankers and civil servants where they can beat their chests (gently), say sorry (sort of) and be let move on. As speculative as theology, it is an act of exorcism by the Oireachtas that will change little in practice. “Go and do not sin again” is likely to be an apt title for its forthcoming report. No penance will be done.

If deputies have worked hard at this belated inquiry, that is no more than what they are paid to do. Suspicions linger that it was really intended as a political show trial of the Government’s predecessors.

Political reform comes far too slowly in Ireland. Here we are, almost seven full years after the banks crashed, and one of the chief players in that mess is free to lead deputies and senators in a merry dance to disunity. Sinking in an administrative and political bog, here’s another nice mess the Oireachtas has got us into.

Colum Kenny is professor of communications at Dublin City University