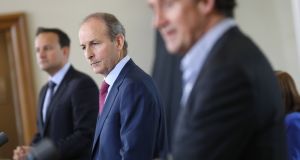 ‘Opposition” the veteran German politician Franz Müntefering once said, “is s***”. He knew what he was talking about. Ever since the second World War it has been the Christian Democrats rather than his Social Democrats who have been that country’s natural party of government.

No wonder, then, that Müntefering’s party, the SPD, has grabbed at the chance of office on those rare occasions it has presented itself – even when many in its ranks have counselled against it, arguing (with no small justification in the SPD’s case, it has to be said) that the electoral price of participating in a coalition is too high.

Debates about whether or not to go into government, of course, are nothing new. But in Germany, as in Ireland this year, they can take on a particular edge. That’s because, especially recently, the only realistic option has been a ‘grand coalition’ – a Große Koalition or GroKo for short – between the SPD and its old enemy the CDU/CSU – the centre-right party led by giants such as Konrad Adenauer, Helmut Kohl and, of course, Angela Merkel.

The compromises involved in coalition are hard enough anyway without having to grit your teeth to work across a historic, even tribal divide. But sometimes, as Fine Gael and Fianna Fáil have finally had to acknowledge, there is simply no choice, on top of which they’ve also had to face the fact that, as a result of both of them performing poorly in February, it takes more than just two to tango.

As a result, the new government should, I guess, be called a GroKo-plus. Strictly speaking, in fact, it’s what political scientists call a ‘minimal-winning coalition’ – a government made up of parties that control as near to just over half the legislature’s seats so as to combine their need to win confidence votes and pass budgets with their desire to share ministerial portfolios among as few rivals as possible.

But whatever we want to call the coalition – and no doubt Sinn Féin, having been treated (to slip into the political science jargon one more time) as a ‘pariah party’, would have some choicer epithets – are the sceptics in Fianna Fáil, Fine Gael and the Greens right to see it as somewhere between a suicide pact and an accident waiting to happen? Is the whole thing bound to end in tears – and sooner rather than later?

According to the stats, not necessarily. Although, historically, Western Europe’s minimal-winning coalitions tend not to last quite as long as its (rather more unusual) single-party majority governments, the difference is small: between 1945 and 2010 the average life of a single-party majority government was just over 1,000 days; but it was still more than 900 for minimal-winning affairs (compared with just over 500 for minority administrations). Anyone banking on GroKo-plus imminent collapse, then, might not want to hold their breath.

The coalition can also stand more of a chance of going the distance if the parties involved get around to reading the number-crunching research that shows those responsible for collapsing a coalition tend not to benefit electorally from that collapse.

Naturally, it’s always tempting to believe that the grass is greener on the other side or to think that staying too long in an arrangement – particularly a counter-intuitive arrangement such as this one – is bound to end badly. But just because that has arguably been the case in Ireland in the past doesn’t make it some kind of iron law. Likewise, it not always and everywhere true that small parties are simply chewed up and spat out by their larger coalition partners, never to make it into office ever again.

And there’s something else that the comparative stats suggest: although single-party majorities tend to honour more of their manifesto promises than coalitions, majority coalitions can often find it easier (and much easier, of course, than minority governments) to achieve what might otherwise be highly contentious reforms. That’s because cross-party consensus, even if it’s sometimes fragile, is to some extent built-in. Given the massive challenges posed not only by Covid-19 but by a possible no-deal Brexit, that can only be a good thing.

Moreover, GroKo-plus has already done several things which might help it avoid coming to grief. It has hammered out a detailed and transparent coalition agreement. It has gone for an essentially proportional distribution of ministerial portfolios. And for the most part each party controls those ministries where it most hopes to deliver its manifesto priorities, albeit accepting that they may have to work with junior Ministers from other parties in a ‘watchdog’ role.

Happiness (or what passes for happiness) in coalition is a division of labour. It’s about chalking up and celebrating your own achievements and (even if through gritted teeth) allowing your partners to do the same.

True, a degree of harmony does have its downsides. The critics of coalition in Fianna Fáil, Fine Gael and the Greens are bound to shriek sell-out. Meanwhile, Sinn Féin will do its best to cast GroKo-plus as an establishment stitch-up, just as radical populist parties in Germany and Austria continually do with grand coalitions there. And, like them, it may even enjoy some success as a result.

But, ultimately, for those parties on the inside rather than the outside, what is the alternative? As a wise man once said, Opposition “ist mist”.

Tim Bale is professor of politics at Queen Mary University of London and author of European Politics: a Comparative Introduction

1 Officials refuse to rule out ‘Midlands lockdown’ following Covid-19 surge
2 Food myths busted: Are coffee and salt so bad for us? Are calorie counts worthwhile?
3 State’s biggest landlord records 30% rise in rental income
4 Covid-19: Public sector workers at home may be asked to foster children
5 Masks Q&A: Who has to wear them in shops and what happens if you don’t?
Real news has value SUBSCRIBE