A new page in penal dysfunction has been turned 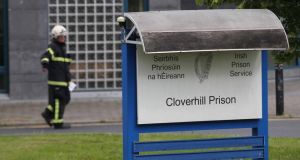 Emergency services at Cloverhill Prison, Dublin after prisoners staged a protest on the roof of the prison. Photograph: Stephen Collins/Collins

We cannot blame the weather. Hot summers used to spell trouble, especially in cramped Victorian piles such as Mountjoy. The large-scale riot of 1991 – when the roof was torn off as prisoners ran amok – should have put an end to those types of uprisings. But this week has seen a flexing of muscles across the penal spectrum.

Early in the week three teenagers absconded from Oberstown youth detention centre. Then the prisoners of Cloverhill issued threats and carried out a riot and a hostage-taking. Two managed to take the jail’s roof.

Since March, we are told, 31 members of staff have been seriously assaulted in Oberstown youth detention centre, now run by the Departments of Education and Health . The rise in the age profile of boys – mainly aged 16 and 17 – who were once housed in St Patrick’s Institution has undoubtedly added to the issue.

The marriage of the old borstal system and the more modern holistic approach towards education and rehabilitation in Oberstown obviously has not gelled as expected. Moving disruptive boys from a Department of Justice youth prison to a Department of Health-run institution throws up many of the old problems.

Cloverhill, a fairly new institution mainly for remand prisoners has, until this week, remained largely off the public’s radar.

Remand prisons are particularly difficult to run and work in. Inmates are there for a short time until discharged or sentenced to prison terms in “normal” jails. The turnover of prisoners is relentless and continuous.

Staff would not build up the same level of knowledge or rapport with a very transient population. The fact that this jail has, until now, survived without attracting headlines is to be commended.

It’s reported that 11 inmates needed hospital treatment after a control-and-restraint team had to intervene. That points to the ferocity of the dispute.

The fact that two inmates managed to get on to the roof raises further questions. And massive damage was caused to Cloverhill.

To muddy the penal waters further, it is reported that 33 staff attached to the Escort Corp turned up for work without their driving licences this week.

The fallout from this is worrying. My knowledge of prison staff is of a group with strong patience. That 33 men hadn’t the required paperwork to carry out their duties signals a malaise that has been allowed to get out of hand.

Transporting prisoners to the courts of the land is onerous and dangerous. Not alone that but the courts are the highest authority in this nation: anything that hinders their smooth running is very serious.

This action indicates a serious challenge has been thrown down to the Irish Prison Service and, in my opinion, to the POA (Prison Officers Association). The former is the employer; the latter is the union.

The Escort Corp appear to have potentially left themselves open to a disciplinary sanction from IPS and their own union with a lot of ground to make up. You cannot underestimate the power of the court service once it sees that it has been affected by a dispute not of its making.

Leo Varadkar correctly described the Department of Justice as not fit for purpose. Putting in a new Minister and changing around a few civil servants is essentially window dressing.

When events spill across the penal system from our youth, through the mature prisoners and on to prison staff, be they drivers, or the officers involved in a riot serious enough to require the hospitalisation of 11 inmates, then a new page in penal dysfunction has been turned.

The Ides of March did it for Caesar; let’s hope the winds of this July don’t damage the frail ecosystem that is our penal infrastructure.

John Cuffe is a criminologist and a former senior prison officer.