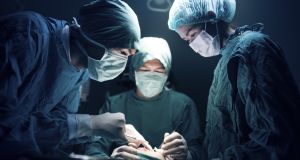 Rolling theatre closures are familiar now to all surgeons across Ireland. Photograph: iStock

There are many factors which are intensifying the problems facing the health system but one that is undeniably central is the shocking shortage of beds in our hospitals. Because of budget cuts, the public system’s capacity to meet demand for care has been reduced.

This lack of capacity in the public hospital system has been identified as a principal problem by the Irish Medical Organisation (IMO) in its submission to the Oireachtas committee on the future of healthcare. It estimates that 1,600 acute hospital beds have been removed from the system since 2009. These need to be replaced if we are to meet existing demand for surgery and other services.

However, rolling theatre closures are familiar now to all surgeons across Ireland. A practice started in response to cuts in hospital budgets has now become embedded in Irish surgical life. The result is longer waiting lists and increased patient suffering. The policy of cancelling elective surgery in response to emergency department overcrowding has worsened the situation, with Peter O’Rourke, an orthopaedic surgeon in Letterkenny, saying earlier this year that he was out walking his dog instead of doing operations as a result of theatre closures and cancellations.

The programme for government includes a provision for increased funding for the National Treatment Purchase Fund in an attempt to reduce waiting lists for elective procedures.

However, data from the National Clinical Programme for Surgery at RCSI, led by Prof Frank Keane, shows such waiting list initiatives only have a temporary effect on waiting lists. They do not address the fundamental problem of lack of capacity in the public system and so the numbers waiting inevitably rise to pre-initiative levels once funding for these has been used up.

At the moment, the Irish health system is asking surgeons to win Olympic gold but isn’t even giving them the bicycle to do it.

Until operating theatres are reopened and additional bed capacity is created, waiting lists will stay with us, and Irish surgeons will be unable to do their job.

1 At least eight shot dead in German town of Hanau
2 I’m worried about my neighbour’s new ‘shed’ and what he intends to use it for
3 Person claiming to represent ‘ghost ship’ owner comes forward
4 DUP pleads with UK to reduce salary threshold for migrant workers coming to North
5 A Russian cruiser with ‘cannibal rats’: What other ‘ghost ships’ could be out there?
Real news has value SUBSCRIBE