‘The Government should have nothing whatsoever to do with talks about going back to where we were before in terms of public pay, or any other area of the public finances’ 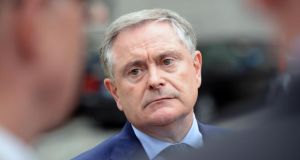 ‘The trade union conference seasons kicks off next week and top of the agenda will be pay. On the invitation of Minister for Public Expenditure, Brendan Howlin, the public sector unions are to enter talks on pay with the Government, probably starting early next month. The teachers’ conferences – and those to follow for other groups in subsequent weeks – will be a warm-up act for these talks.’ Photograph: Eric Luke / The Irish Times

The trade union conference season kicks off next week and top of the agenda will be pay. On the invitation of Minister for Public Expenditure Brendan Howlin the public sector unions are to enter talks on pay with the Government, probably starting early next month.

The teachers’ conferences – and those to follow for other groups – will be a warm-up act for these talks. We can expect much banging on lecterns and demands for the fruits of the recovery to be distributed to teachers, nurses, gardaí, civil servants and so on.

Towards the end of the conference season, on April 21st, the Government will publish its spring economic statement. This will probably indicate that there might be scope to add about €1 billion to borrowing on budget day. This figure might increase a bit later in the year if tax trends allow. However, for the moment Ministers will nod their heads gravely and say they have only limited room for manoeuvre, difficult choices to make and so on. It will be the usual stuff we hear when there is a bit to give away, just a few months earlier than normal.

The subsequent talks with the public sector unions will be described as “difficult” and may even break down once or twice. A few late-night sessions are guaranteed, with all sides warning that success is proving elusive.

At some stage an accommodation will be reached which will involve some extra money for public servants from early next year – not long before the general election will be held. Coincidentally, of course.

One word will feature in the middle of all this. It is “restoration”. It should be banned.

The Government should have nothing to do with talks about going back to where we were before in terms of public pay or any other area of the public finances.

The public sector unions will seek restoration of €2.2 billion in pay cuts made during the crisis. They will seek a clawing back of two pay cuts and the pension levy.

Meanwhile, annual seniority-based pay increases – increments – are being reintroduced. There will be demands to row back on the extra productivity in some areas negotiated as part of the Haddington Road agreement – mainly extra working hours.

If this agenda is adopted, then the argument will be about how far, and how quickly, the clock is turned back.

Remember we have borrowed close to €100 billion since the crisis broke to bridge the gap between spending and tax, without counting in the money poured into the banks.

Part of the political problem now is that this Government and the last one presented the solutions to this as temporary measures to combat a financial emergency. By their nature temporary measures are reversed. Getting off this political hook is difficult, not only in relation to public pay but also the much-hated USC and other spending cutbacks. But restoring everything will, by definition, land us back where we started.

There are only limited resources to distribute, but somehow the public sector unions have pushed themselves to near the top of the queue.

But on what terms should increases be granted given that public servants are relatively well paid and “pensioned” compared to their private sector counterparts, even if the crude comparisons often used overstate the real difference?

By starting the argument on the grounds of restoration the unions are dodging this argument and trying to frame the talks as merely deciding how quickly they get the cash back.

The Government has wider priorities, or at least should have. For 2016, for example, should we have more nurses and frontline staff in emergency departments or pay more to the ones we have?

Should money go into tax cuts or pay increases, or a bit of both? And what about the need to boost investment levels in areas such as social housing?

The agenda should include a new way of looking at public pay – and of tackling the long-term public pension time-bomb.

The old automatic increment system should be torn up. Pay rises need to be based on productivity, both individually and collectively – and on the state of the public finances, which are still not completely fixed.

There is going to be a heck of a scramble over this budget, with tax cuts also promised and demands for higher spending all over the place.

Every measure in the budget will be controversial because there simply isn’t enough cash to meet half the demands being made on the exchequer.

Higher pay for public servants must mean better public services. It cannot just be part of a restoration of a system of spending and taxing which we couldn’t afford in the first place. @CliffTaylorIT

1 Tony Holohan stepping back from role as chief medical officer
2 Coronavirus: Rise in transmission in Ireland sparks concern
3 A ‘rock’ and a ‘patriot’: Tributes paid to Tony Holohan as he steps back
4 Several factors pushing Boris Johnson towards a Brexit deal with Brussels
5 Why are markets booming when a crash is on the way?
Real news has value SUBSCRIBE