Trouble in the air: The Government should ignore calls for a whole host of new reliefs ahead of the Budget. They will only lead to more trouble in future 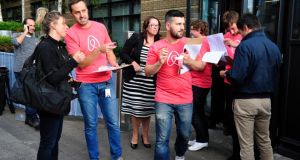 When the rules governing a new tax relief to encourage people to rent out rooms in their homes were being drawn up nearly two decades ago, no one had heard of “ sharing communities”, and the idea of booking a break on your phone would have been dismissed as science fiction. The rent-a-room relief was designed with lodgers in mind, not hipsters.

Now there is debate whether this relief should apply to “hosts” who rent out rooms for short periods via the Airbnb service. It all comes down to an interpretation of 1997 legislation designed to cover something else entirely. The Revenue is in no doubt that, like a B&B owner, they should not qualify for the relief, though it could face a legal challenge.

Whether you think these people should pay tax or not, it shows yet again how special tax reliefs more often than not demonstrate the law of unintended consequences. They are designed for one thing, but so often take on a life of their own. Property reliefs introduced in the 1980s and early 1990s for everything from multi-storey car parks to office blocks ended up as tax dodges. Patent tax relief turned into a tax bolthole for senior executives. Mortgage interest relief helped push up the price of property and rent relief did the same to rents.

Of course tax reliefs are necessary. At a basic level they ensure people on very low incomes don’t pay taxes on their earnings. They allow the self-employed and businesses to write off legitimate expenses.

The Commission on Taxation, reporting in 2009, found there were 130 reliefs and allowances which could be seen as intrinsic and normal parts of the tax system. The problems tend to emerge with the “special” allowances – the ones designed to “promote” some activity or investment which all too often just end up as expensive tax shelters.

It is the kind of grey area you don’t want in a tax system . For most of us tax just disappears every month, using a set of clear rules, but the game between tax advisers and the Revenue is a constant testing of the boundaries of where and how special reliefs can be deployed.

In recent years we have managed to start ridding ourselves of many of the old tax allowances. The property tax reliefs were slowly phased out – way too late, of course. For many years politicians won local approval for gaining tax “designation” for some part of their constituency – a break for investing there. The morphing of these reliefs into tax dodges became legendary – in one case involving consortiums of 13 people buying floors in buildings in the IFSC as a valuable tax shelter.

Some of the more aggressive corporate tax breaks are also ending, though there is a scramble to replace them with shiny new ones – more ways to help multinationals pay less tax. The stallion tax break is also gone, but, remarkably, the artists’ exemption lives on, exempting up to €50,000 of qualified earnings. It is again being “reviewed”. There are 16 different tax breaks relating to “philanthropy”.

Nor do tax reliefs apply only to the wealthy. One of the more expensive is the exemption of child benefit payments from income tax, for example, or the relief on health insurance. Successive governments have ducked the idea of taxing or means-testing child benefit, mindful of the controversy it cased when proposed back in the 1990s.

Tax reliefs do have a place. But more often than not they are a political answer to a demanding lobby. They generally don’t address the key issue in any comprehensive way. And all too often the law of unintended consequences kicks in, with the relief being used to shelter income rather than achieve an economic gain.

Generally it is better to have as few reliefs as possible and to focus them on clear priorities. After all, if you give a tax relief for every worthy cause, none of them will work well. Special reliefs are generally best avoided. Better to use the money to keep general taxes lower or improve public services. Because, while those pleading for tax reliefs will claim they will improve things, in most cases they are just adding to someone’s bottom line and costing the rest of us.