Chris Johns: USC is actually quite a sensible tax

A good idea in principle it has been tortured into submission by exemptions, bands, multiple changes to rates and promises of abolition. 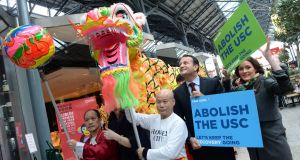 Minister Leo Varadkar TD with Fine Gael Dublin Bay South candidate Kate O’Connell. while preparations are made for Dublin Chinese New Year Festival, at CHQ, while the party announced their plans to abolish the USC by 2020. Photograph: Dara Mac Donaill / The Irish Times

The one thing that every finance expert agrees upon is that the tax system desperately needs to be simplified. That’s true for Ireland and just about every other country in the world. It is strange, therefore, that the only thing that ever happens whenever a minister for finance, treasury secretary or chancellor of the exchequer opens his mouth is that yet another layer of complexity is added to a system already riddled with jargon, anomalies and loopholes wide enough to drive a bus the size of Google through.

Just over a century ago the United States tax code, for example, ran to 400 pages. Today, an American citizen needs to wade through 73,954 pages of regulations before making a tax return. In 2010 the UK government felt the need to set up an independent Office of Tax Simplification (British taxpayers can live in hope).

Modern tax systems are a deterrent to growth. Our tax laws need radical reform but the debate is conducted in two-dimensional terms: taxes have to either go up or down or, occasionally, be eliminated.

The universal social charge (USC) is a case in point: a good idea in principle but one tortured into submission by exemptions, bands, multiple changes to rates and promises of abolition.

Two key principles of taxation were violated almost the moment the USC was invented: simplicity and constancy. Other than that, it is actually quite a sensible tax. It raises a lot of money, quite a few people pay it (a broad tax base) and it is very progressive (the more you earn, the more you pay). It is, nevertheless, the second most hated tax in the land, a memory of the financial crisis and the days when David Drumm still lived in Ireland.

Income taxes are despised as well. First introduced in the UK in 1799, they were abolished in 1802, reintroduced in 1803, eliminated again in 1816 only to be brought back in 1842. For many years afterwards, successive politicians promised to abolish them again, a commitment that was never honoured.

Another oddity is that nearly 40 per cent of workers do not pay any income tax. The rush “to take as many workers as possible out of the tax net” has obvious political attractions but when you collect a lot of money from a small group of people (and a tiny number of companies) you are violating yet another of those key tax principles: sustainability. Barely 18 per cent of workers pay nearly half of all income taxes.

Another downside from a deliberate narrowing of the tax base is that we create yet more incentives for populist policies: politicians arguing for higher income taxes will not suffer electorally in the eyes of at least some of the 838,164 workers who do not pay tax. Perhaps Sinn Féin is not convinced of the need to abolish the USC since most of its target voters do not pay it.

The party can commit to higher taxes using the same partisan logic. It’s made worse when the political promise is dressed up as the Robin Hood strategy: taking from the rich to give to the poor is another sound principle of taxation. It’s called redistribution, it’s a good thing and we already have more of it than any other country. But narrow political appeal based on “vote for me and I will raise someone else’s taxes” is no way to build a sustainable system.

Oliver Wendell Holmes, a justice of the US Supreme Court, correctly said “taxes are the price we pay for a civilised society”. Public services need to be paid for with taxes. We never debate the quantity or quality of those services other than always to demand more. Our taxation debate is equally fatuous. The promise to abolish the USC amounts to a pre-spending of assumed economic growth. We should, by now, have learned that lesson.

The one party that at least pays lip service to the much-needed simplification of our tax laws is Fianna Fáil. Some might find that curious, if not ironic. It is unlikely to be the party’s main election promise but it has the virtue of making abundant sense. USC (and PRSI) should be amalgamated into the income tax system. The tax change second most needed is an increase in carbon taxes. Indeed, a rise in taxes on oil and petrol, given what is happening in the real world, is far more likely – and sensible – than the abolition of the USC.

1 Ireland among countries urged to consider reinstating Covid-19 restrictions
2 Lowest numbers in two weeks as one more Covid-19 related death and 35 new cases reported
3 ‘I’ve been sleeping with my girlfriend’s sister. I need help. What do I do?’
4 Ward at Naas General Hospital closed due to suspected Covid-19 outbreak
5 Russia set to begin Covid-19 vaccinations within weeks
Real news has value SUBSCRIBE