Charlie Flanagan: Why the Rising commemorations will be a global event

‘Ireland in 1916 was. as it is now, a global island, a nation that both reflected and was engaged in the bigger international issues of the day’ 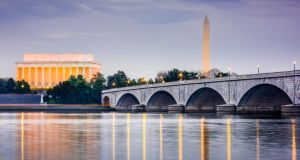 The John F Kennedy Center for the Performing Arts in Washington DC, where a three-week festival, Ireland 100: Celebrating a Century of Irish Arts and Culture, will take place next year. Photograph: Getty Images

The lead-up to the centenary of the 1916 Rising presents many opportunities to reflect on the diverse and complex history of this island. And thinking about the many strands of our national narrative is also an opportunity to look at our place in the wider world, then and now, and to consider the international dimension of events in Ireland a century ago.

The 1916 Rising took place within a global context of social and political change. This included the international labour movement in which the Scottish-born leader of the Rising, James Connolly, was involved. The campaign for women’s suffrage in Ireland, Britain and the United States, attracted the involvement of Countess Constance Markievicz and Margaret Skinnider. Human rights, which were so vociferously defended by Roger Casement in South America and Africa, also came to be articulated in the Proclamation of the Republic, which sought to guarantee “religious and civil liberty, equal rights and equal opportunities to all”.

The Rising also reflected the instability of the then world imperial order, which was collapsing as the battlefields of the first World War witnessed carnage on an industrial scale. Indeed, the Rising occurred at a moment when, as WB Yeats observed, “things fall apart”. It also came to be a reference point for independence movements far beyond this island, in Africa, India and elsewhere in Asia.

The leaders of the Rising also drew inspiration from their own experiences abroad. Pádraig Pearse, a champion of the Irish language, had spent time in Flanders in 1905, to research minority languages there; and Joseph Mary Plunkett had studied Arabic and cultivated an interest in Orientalism. Perhaps most importantly, five of the seven signatories had spent periods of time in the United States, a country which, very significantly, is referred to in the Proclamation of the Irish Republic. For the Rising’s leaders, connecting with Ireland’s “exiled children in America” was as important then as it is for us today.

Ireland in 1916 was, as it is now, a global island, a nation that both reflected and was engaged in the bigger international issues of the day. This is why I asked Ireland’s network of embassies and consulates to plan events which will engage our diaspora and friends abroad, as well as to present the Ireland of today to the world. And our diaspora and friends of Ireland around the world have already set to work with gusto.

The results of this planning can be seen in the Ireland 2016 Global and Diaspora Programme, which I will launch with Minister of Arts, Heritage and the Gaeltacht and Heather Humphreys in the Royal College of Surgeons Ireland (RCSI) in Dublin on Monday evening. It includes flagship events that will showcase the best of traditional and contemporary Ireland across the full range of the arts, including theatre, literature, music and dance.

These partnerships were already evident in one of first events of the Global and Diaspora Programme, the commemorations of the death of Jeremiah O’Donovan Rossa that took place in New York over this past weekend. (Monday, June 29th marks the actual anniversary of O’Donovan Rossa’s death.) The Irish Consulate, the GAA, the New York County Cork Association, the Ancient Order of Hibernians and many more groups, individuals and other friends of Ireland came together to remember O’Donovan Rossa and his place in our history and in the links between Ireland and the US.

Earlier this year, in May, the Irish Consulate in Hong Kong organised a screening of A Terrible Beauty, a feature-length docudrama set during the Easter Rising of 1916, at Wah Yan College, a local secondary school. The event was enhanced by the presence of Fr Joseph Mallin, who taught at the school. Fr Mallin is the son of Michael Mallin, who was executed in May 1916, and is the last surviving child of any of the leaders of the Easter Rising. The RCSI, where we will launch the Ireland 2016 Global and Diaspora Programme this evening, was Michael Mallin’s post during the fighting in St Stephen’s Green.

The centrepiece of the commemorative events in the US will be Ireland 100: Celebrating a Century of Irish Arts and Culture, a three-week festival, from May 16th to June 5th 2016 at the John F Kennedy Center for the Performing Arts in Washington DC . In London, classical musicians from across Ireland will perform at a concert in London’s Wigmore Hall in April 2016.

Young people and community groups from Edinburgh to Buenos Aires are also organising local events; academic institutions from UCD to Notre Dame are planning seminars and conferences; arts venues large and small will mount exhibitions for the general public; and the GAA, which is the very essence of a local organisation working in a global context, will promote wider participation in our national games.

The ferment of revival that influenced the leaders of the Rising had its source both in their local experience and their intellectual engagement in the wider world. In commemorating their achievements and marking their legacy, it is therefore entirely fitting that our programme provides an offering to the Irish diaspora and indeed all friends of Ireland throughout the world.

Charlie Flanagan is the Minister for Foreign Affairs and Trade