Opinion: The Spanish government tried by every means possible to scare citizens away from voting with legal threats 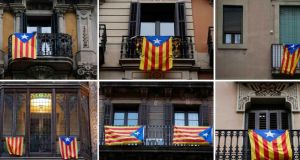 The right to vote is one of the most prized rights in any democracy. All the other rights are more or less a direct consequence of the opportunity that citizens are granted to express their opinion on important subjects through their votes. In Catalonia there is a broad majority of citizens who want to vote and decide the political future of this territory in terms of it remaining a part of Spain or becoming an independent state.

The question everyone is now asking in Catalonia is why Catalans cannot vote in a legal referendum like they had in Scotland and Quebec. Are we second-class citizens? Out of respect for the democratic values that we share with the rest of Europe, I believe we have reached the point where we need to ask this question beyond our own borders, and move beyond the point where “It’s an internal matter for Spain to resolve.” Why can’t the Catalans vote? We are not asking you to support a Yes or a No vote, but simply that our right to vote be recognised.

Prime minister Mariano Rajoy and the Spanish government repeat the same idea over and over: that it is illegal because the Spanish constitution prohibits it. That is not true. The constitution might prohibit secession, but it does not prohibit learning the opinion of citizens about a matter as important as this. Moreover, the constitution is really just a law, a very important one, but nonetheless a law. And to work well, laws are made to serve the citizens and not the opposite.