Cars: good or bad? It’s not that simple in Dublin city centre 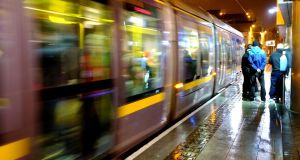 Luas in Dublin city centre: cars are necessary but too many are bad. Towns designed for cars rather than people don’t work. It is essential we strike the right balance. Photograph: David Sleator

Submissions on the joint Dublin City Council/National Transport Agency transport proposals were due by August 7th, and almost immediately after that the discussion was reduced to specious arguments concerning car use. So let’s state the facts: 19 per cent of Dublin city shoppers use their car. This compares to bus 42 pre cent, Luas 17 per cent, walking 15 per cent, DART 3 per cent and cycling 4 per cent. However, people’s spending patterns alter depending on transport used. So when it comes to spend, the figures are car 31 per cent, bus 37 per cent, Luas 15 per cent, walkers 12 per cent, DART 3 per cent and cyclists 2 per cent.

The “car: good or bad?” debate is not unique to Dublin. Similar discussions are taking place in cities across the western world. The argument boils down to a simple proposition: would more people visit a town if there were no cars and it had a more pleasant environment; or do cars play an essential economic role that can’t be substituted?

The debate is often emotive and ideological, giving off more heat than light. However, the research findings are clear. Cars are necessary but too many are bad; and towns designed for cars rather than people don’t work. It is essential we strike the right balance.

The evidence shows a link between footfall and car park availability. There is a further link between customer spend and the quality and variety of a city centre offering and this in turn impacts on footfall. So reasonable car parking access is an important ingredient for town success. What can be considered reasonable?

Businesses in Dublin city centre aren’t looking for an increase in spaces to match European norms, they just want reassurance that the existing spaces will still be accessible to their customers in the future. Nervousness among city businesses has not been helped by the fact that the authorities have been unable to clarify how access to car parks and hotels will be maintained. There is no clarity around disabled access nor how it is proposed to facilitate deliveries. These are legitimate questions that need to be answered.

Businesses would equally point out that traffic congestion peaks at rush hour when commuter traffic is dominant. Customers tend to come in to the city centre during off-peak hours and at the weekend.

There are some 13,000 car parking spaces provided to public servants free of charge in Dublin city centre. There is also a much smaller number supplied to private sector employees. In Nottingham a contribution is levied on such spaces with the proceeds ring-fenced for public transport improvements. The result is fewer cars and more funding for public transport.

Indeed, why don’t we charge for car parking across the entire Dublin transport region to provide additional funding for a better and integrated public transport service?

The reality is Dublin needs serious investment in its public transport system. For too long we have underinvested in the transport system, to the point that it threatens our social and economic growth.

The Sunday Business Post recently reported that “the High Court has imposed a deadline of September 24th for Irish Rail to activate compulsory purchase orders for the [Dart underground] scheme or the planning permission will lapse”. To allow this to lapse would be a huge opportunity missed.

Similarly, we need a viable solution for connecting north Dublin and the airport to the city. Metro North was shelved on cost grounds, so we have the non-viable Bus Rapid Transit (BRT) proffered in its place. If BRT can achieve a bus every two minutes at its intended peak it will accommodate 3,600 passengers per direction per hour, while the known demand is 10,000 per direction per hour in stages.

So we have a proposed solution, described as a temporary stop gap, which can meet only one-third of current demand. However, we will still fork out €250 million to deliver it. Why are we progressing something that is obsolete at the planning phase?

We have to progress with projects which will be sustainable in the long term. Let’s do what we have to do and get it right first time. People will opt for public transport if it is efficient, reliable and affordable. We can get this right with some vision. Richard Guiney is chief executive of DublinTown, the business improvement district for Dublin

1 ‘He was some man’: Shane’s journey from care child to fearless activist
2 Mary Lou has to call for the smelling salts as SF councillor deals a knock-out blow
3 Chris Hadfield on the climate crisis: ‘The world has seen much, much worse’
4 Murdered and mutilated: Keane Mulready-Woods and the teenagers of gangland
5 Netflix: The best 101 films to watch right now
Real news has value SUBSCRIBE