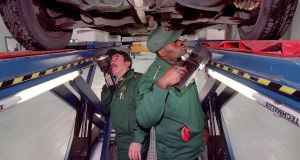 “My car and I will appear at the appointed hour at our local testing centre, where I will book in, hand over the sanitised keys, and then retreat to a nearby chapel and pray.” Photograph: David Sleator

I realise there are many serious issues we need to worry about right now. All the same, I have my own concerns. For instance, I’m starting to show the symptoms of a condition that could affect up to half the adult population of Ireland, if the latest CSO enumeration of road vehicles in the Republic is to be believed.

Last spring, when the Covid-inspired lockdown had the ripple effect of delaying all car safety inspections for up to four months, I self-isolated and then breathed an unmasked sigh of relief. My 2006 Nissan Tino, due for its annual physical in August, now didn’t have to appear in the NCT’s testing bays until December.

Which means the time of reckoning (for my car anyway) is imminent. Later next month, the two of us will appear at the appointed hour at our local testing centre, where I will book in, hand over the sanitised keys, and then retreat to a nearby chapel and pray.

My disquiet over this matter might seem trivial, especially now, but I have some history here.

Back in May 2004, my mother Phyllis and her good friend Barbara were visiting us in Dublin, and I was eager to show them the shiny byproducts of Ireland’s roaring Tiger economy, as well as the Emerald Isle’s enduring homespun ways. To this end, a trip to Cork was arranged to call on my mother’s first cousins. Since we can nearly touch the Wicklow border from our Dublin home, I motored down the scenic east coast route, providing commentary and local colour as we made our way south.

On the winding stretch connecting Enniscorthy and New Ross, the leisurely nature of our excursion was disrupted when I came around a bend and encountered a single flawless builder’s block sitting serenely in the middle of my lane. At 80 km/h, there was no time to react and my only choice was to drive straight over it.

The resulting crunch and grind was deeply unsettling, both to myself and my passengers, so I pulled off at the nearest lay-by to inspect what I feared to be considerable damage.

To my relief and disbelief, the alterations to my Nissan Almera’s front end were minimal. A side bumper clip was loose, but I saw no wet spots on the ground nor did I hear any tell-tale gurgling sounds. The various secondary fluids required to run an automobile were apparently still circulating within a closed system.

We reached Cork and had a pleasant time catching up with our Hanlon and Donnelly relations, hearing stories only they could tell about my grandmother’s life before she sailed for Boston in 1930, leaving behind her parents and six siblings. Our itinerary also included a visit to the modest cottage in Fountainstown (no longer in the family) where my grandmother was reared and where I found accommodation during my frequent trips to Ireland in the 1980s.

All the while, however, I was apprehensive. My car’s undercarriage had taken an awful wallop and it was no sure thing – despite my ongoing inspections over the course of our southern sojourn – that we would return to Dublin without incident.

Thankfully, we got home safely.

Four weeks later, when I brought the car for its NCT exam, the fun (in an ironic sense) began. All the test results were positive bar one: the front wheel alignment was out of kilter. I consulted the lads in my regular garage and they spotted the reason. The front axle was dented, from my concrete encounter in Wexford.

But the effect was negligible, according to the garage’s instruments, certainly within the allowed limits. So I returned for a re-test. Failure again.

Back to the garage, and after some tinkering with the front end, the car registered another passing grade. Then – you guessed it – failure again at an official level.

Rather than repeat this exercise until I found a sympathetic NCT technician, I returned to my garage for further counsel. I was told the only sure way to pass inspection was to replace the axle. I could order a new one – with a price tag of several hundred euro – or I could tour the local scrapyards and find a second-hand one, which my garage would then gladly fit.

I discovered the appropriate part in a car graveyard in Dún Laoghaire, brought it to be fitted, and then returned for inspection. My car passed – fourth time lucky! – but the damage had been done. Whenever I go for my NCT certification these days, I get all clammy and fidgety, expecting only bad news involving a sizeable outlay of my cash and time.

Of course, it’s always reassuring to find out that your car at least isn’t a total wreck.