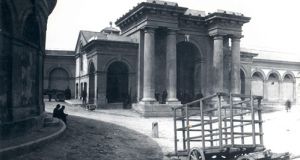 The Butter Market Exchange in Cork, with the Firkin Crane premises on left, circa 1900. Photograph: National Library of Ireland/Lawrence Collection

Long before and after the Famine, butter was a key ingredient in the economic life of Munster. Under the shadow of the iconic steeple of St Anne’s Church (known to many as Shandon Bells) lies what remains of the once thriving Cork Butter Exchange. The sheer volume of butter that passed through the Exchange meant that for much of the 19th century, the Cork Butter Exchange was the largest butter market in the world.

The Exchange opened its doors in 1770 and from day one, it was all about quality control and transparency. It was established by the Committee of Merchants (a group of local butter merchants), who were concerned about maintaining the standard of butter that was being exported from Cork. It was a voluntary arrangement whereby producers from all over Munster sent their butter to the Exchange to be weighed, inspected and graded.

A team of four inspectors tasted the product and classified it in a range from first class through to sixth class. At the height of the season, 3,000 wooden casks (known as firkins) of hand-made butter would be delivered every morning. Inspectors would have to examine somewhere between 100 and 150 firkins an hour. They took a bore of butter and used the senses of touch, taste and smell to decide where on the scale the specimen belonged.

In a sign of the importance of butter to the Irish economy in the 19th century, newspapers posted daily and weekly reports on how the market was performing

Butter was transported to the Exchange from towns and villages in Cork and Kerry along routes that became known as “Butter Roads”. In the early years, suppliers used horses to carry the load, strapping a couple of firkins of butter around the animal. As volumes increased and as they became more prosperous, horse-drawn carts were used to bring their butter to Shandon for inspection.

In 1835, one-third of all butter exported from Ireland left from the port of Cork. Ships from Sweden, Denmark, Holland, Spain and Portugal transported the goods home, from where they were often sent on to their respective colonies. Cork-branded butter was sent to all continents, making its way as far afield as the West Indies, America, Brazil, and Australia. Cork also supplied the British navy with provisions for their bases in Cork. The hand-made butter had to be heavily salted to preserve it, as there was no means of refrigeration at the time.

In a sign of the importance of butter to the Irish economy in the 19th century, newspapers posted daily and weekly reports on how the market was performing. In much the same way that share prices are reported on today, reports gave a detailed breakdown of the quality of the butter inspected at the Cork Butter Exchange (how many firsts, seconds, thirds, fourths, etc), as well as the prices that were achieved. By the mid-19th century, 30 million lbs of butter was being exported from Cork every year.

For the Irish market, margarine and butterine (a mixture of butter and margarine) were cheaper alternatives to butter and were gaining in popularity

However, towards the end of the 19th century, things changed radically. Irish butter prices collapsed and the Exchange began to lose its monopoly and its significance. This came about through a range of factors, not least new technologies, declining markets, change in tastes and ultimately, failure to adapt to all of these changes. Some change did come, but it was too little, too late.

The British consumer grew to like the taste of French blended butter and lightly salted Danish butter, which were both of a consistently high quality. These were much more palatable to the British tongue than the heavily salted Irish butter that was still being transported in wooden firkins.

For the Irish market, margarine and butterine (a mixture of butter and margarine) were cheaper alternatives to butter and were gaining in popularity. Creamery co-operatives which had been established all over Ireland in the 1880s, provided the public with access to fresh high-quality creamery butter. The Cork Butter Exchange eventually closed its doors in 1924.

One of the buildings associated with the butter trade in Shandon was the Firkin Crane. This is a large circular building that was used to prepare and repair the firkins which were used to store and transport butter. It is now home to Cork City Ballet and the Cork Youth Ballet Company, which was founded in 2015. Also nearby is the Butter Museum, which tells the story of butter in Ireland and houses artefacts associated with the butter making process and the Butter Exchange.

The building that housed the Exchange, with its decorative portico and Doric columns was turned into a hat factory in the 1930s. Most recently, it was used as a traditional crafts centre. Today, the once bustling Butter Exchange lies idle. Ambitious plans were announced for its redevelopment in recent years, but these led to nothing. Maybe it is time to go back to the drawing board to design something worthy of the institution that put Cork on the world map.