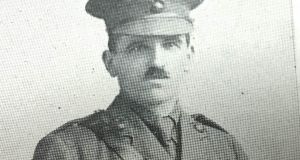 In Glasnevin Cemetery there is a faded headstone over the Neilan family plot. Husband and wife John and Eva Neilan are buried there. They came originally from outside Roscommon town. After her husband died, Eva Neilan moved to Dublin.

She died in 1930, outliving the first of her children listed on the headstone Lieutenant Gerald Neilan R.D.F (Royal Dublin Fusiliers).

His date of death is instructive as to when and why he died — “killed in Dublin, Easter Monday 1916, aged 34”.

Neilan was with the 10th Royal Dublin Fusiliers (RDF) which was training in the Royal Barracks (now Collins Barracks) and about to embark for France. The battalion knew they faced death in the trenches of the Western Front. They never expected it on the streets of their own city.

When the rebellion broke out on Easter Monday morning, Neilan marched his men out of the Royal Barracks and turned left on to the quays in the direction of Dublin Castle.

The rebels had correctly anticipated that the British army would use this route to access the city centre. They smashed the windows of the institute, barricaded the doors and trained their weapons on the quays opposite.

Their fellow Irishmen in khaki uniform presented an extraordinary sight to these nervous volunteers who had never fired a shot in anger before.

“The column erupted suddenly on the quay and continued to pour its khaki bulk out like a sausage coming from a machine,” one remembered. “No advance guard – no scouts thrown out in advance to give warning of enemy forces lying in wait.”

As they marched down Ellis Quay, a hail of bullets came from across the river Liffey. Neilan, who led his men with his officer’s sword drawn, took a bullet straight to the face and died immediately. A half dozen other Fusiliers fell with him.

Neilan was married but had no children. He attended Clongowes Wood College and enlisted in the Sherwood Foresters in 1899, another British regiment intimately associated with the Rising.

He was nearly killed during the Boer War and left the British army in 1908 to become a policeman in Birmingham. He rejoined the army at the outbreak of war, was posted to the Tyneside Irish regiment and then to the Royal Dublin Fusiliers as a bombing instructor.

Like many middle-class Irish Catholic families at the time, the Neilans were loyal to the empire. The Irish public schools, like their English equivalents, were fertile recruiting grounds for the British officer classes.

Nearly 600 Old Clongowians served in the first World War and 95 were killed including two of the best-known Irish casualties of the war – Tom Kettle and Willie Redmond.

One Neilan brother though took a different path. Arthur Neilan was sworn into the Irish Republican Brotherhood (IRB) in 1913 and joined the Irish Volunteers shortly afterwards. He was only 18. On Easter Sunday he was drilling with D Company, 4th Battalion of the Irish Volunteers, but dispersed when the countermanding order came through.

When the news of the mobilisation came on Monday, Neilan rushed home, grabbed his Mauser rifle and proceeded to the GPO under the cover of darkness.

There he was told by Patrick Pearse to proceed to the Four Courts garrison which needed reinforcements.

And so did Arthur Neilan find himself fighting in the same garrison that had killed his brother earlier that day. In his witness statement to the Military Pensions Board, Arthur Neilan gave an account of his activities during Easter Week. He spent the week guarding the approaches to Church Street Bridge by sniping at British soldiers.

He makes no mention of his brother. In any case, it did not dampen his ardour for the republican cause. He was interned in Knutsford and Frangoch. On Bloody Sunday 1920 he was part of a detachment sent to Harold’s Cross to assassinate a senior Black and Tan officer, but the officer was not in. Neilan worked by day and took part in ambushes at night.

Why did he reject the path taken by his other brothers? The clue lies in his age. He was nearly two decades younger than his brother who joined the British army in more quiescent times. Arthur Neilan had been radicalised in the febrile mood which followed the passage of the Home Rule Act in 1912. A younger generation would no longer accept the compromises of the older one.

He lived until 1944 and is buried in the family plot with his brother Gerald. Divided in life, they were united in death. They were both, after all, their mother’s sons.