British Labour must speak up about Brexit shambles 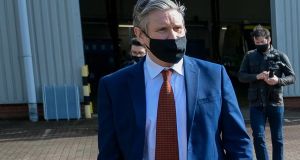 Labour Party leader Sir Keir Starmer is aware many are bored by Brexit, others may want to leave a particularly divisive issue behind them and reversing Brexit is not on any foreseeable agenda. Photograph: Finnbarr Webster

First, the party would prioritise rebuilding the relationship with Ireland and recognises that this will require trust. Second, the recent unilateral Downing Street approach to the Northern Ireland protocol serves nobody’s interests. Third, Britain should seek a less combative and conflictual relationship with Europe than that being pursued by the British government.

These are valuable points that will be warmly welcomed in Ireland as well as by many in Britain. It may, therefore, seem churlish to note that on another important issue, namely the impact of Brexit, the Labour Party is largely keeping shtum. When it comes to the impact of the Brexit trade deal on people and businesses, there seems to be more a biting of lips in the Labour Party than a biting of bullets. This relative silence is worthy of reflection.

Since the trade deal in December, Labour seems to be hiding  its European light under a bushel of political calculation

Labour has long been a fundamentally pro-European party. However, its reticence to assert those credentials publicly is not a new phenomenon. Ten years ago, a Labour frontbench spokesperson assured me that nothing had changed in Labour’s enthusiastic approach to Europe.

The only thing that had changed, he told me, was that the party had decided to hold back from making that case publicly. It seemed quite a big change to me.

Jeremy Corbyn’s manifest lack of enthusiasm for Europe made the years of his leadership of the party something of an anomaly. But his monastic silence during the 2016 Brexit referendum had some of its roots in earlier years. If Corbyn had strongly asserted the pro-EU views of a majority of the party’s membership the outcome of the referendum would surely have been different.

The enthusiasm across much of the party for Europe did find its voice in the subsequent Brexit negotiations. However, since the trade deal in December, the party seems to be hiding much of its European light under a bushel of political calculation.

There are perfectly good reasons for that. The impressive Keir Starmer must prioritise his party’s return to government, not least because it is only in government that he can implement his policies and priorities.

Indeed, only in office could he seek to build a closer UK-EU relationship that is nearer to the centre of gravity of British public opinion. In that context, one of his aims naturally is to win back the minority of Labour voters who supported Brexit.

He is also aware that many are bored by Brexit, that others may want to leave a particularly divisive issue behind them, and that reversing Brexit is not on any foreseeable agenda. He has also, understandably, been prioritising the Covid issue.

Moreover, Starmer may judge that his party, having voted for Boris Johnson’s Brexit deal, could be exposed politically if it now criticises the impact of that deal, even though it should be easy enough to explain that, while the deal was thin in terms of Britain’s interests, it was infinitely better than the No Deal otherwise being threatened.

However, despite such understandable reasons for hesitation, there are good arguments for reconsidering what seems to be an excessive delicatesse on an issue so central to Britain’s interests and international relationships.

First, the negative impacts of Brexit on the British economy and society are clear and will become more evident. Many less-well-off people, including in Labour’s traditional heartlands, will be among those hardest-hit by lost opportunities and jobs.

Second, the Johnson government seems to hope that, by the simple expedient of ignoring the impact of Brexit, the elephant in the room will discretely pack her trunk and go back to the circus. Since much of the British media buys this fiction, significant responsibility falls to the opposition.

Third, the longer that Labour chooses not to challenge a Brexit deal that it reluctantly voted for, the more closely it may become associated with it.

Fourth, an unequivocal commitment to exploring a deepening of the relationship with Europe would establish Labour as the party of business, as well as enhancing Starmer’s international standing, including in Washington.

Most importantly, modern British history tells us clearly that the battle to control the underlying narrative about Europe must be engaged if it is not to drift further out of control.

A relentless tabloid fiction about the recent Brexit deal is already taking hold, largely unchallenged, in which the inevitable consequences of the deal are attributed to European intransigence rather than British choice, in which barriers to trade are presented as resulting from EU vexatiousness rather than British red lines. Standing back from that evolving narrative is not neutral in its effect. The Labour Party intends one day to restore a sensible approach to Europe. Speaking up now would help to shape the necessary context.

Bobby McDonagh is a former ambassador to London, Brussels and Rome