Brian Boyd: Nothing unusual about number of celebrities dying in 2016

Those who made their name, from the 1960s onwards, are reaching an age when their death doesn’t come as a surprise 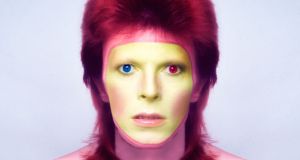 Those who fought in the entertainment trenches during the 1960s were not exactly following gluten-free, organic diets. “Too much is not enough” was the cheerful refrain in those early days when it came to drink and drugs. Photograph: Justin de Villeneuve/Getty Images

From David Bowie in early January to Prince last week with Alan Rickman, Terry Wogan, Ronnie Corbett, Garry Shandling and Victoria Wood and many others in between, 2016 has been a grim year. But this is not some unfortunate statistical blip as many have reported.

Wikipedia - who keep a tally of the deaths of people who merit their own substantial Wikipedia page, say that there were more famous deaths between January 1 and April 21 in 2015 (2,202) than there have been in the same time period this year (2,109).

The Wikipedia survey is instructional as they define “famous” to include prominent members of the clergy or academia. Social media most definitely doesn’t.

The bar for “fame” has been considerably lowered. One of the names to have died this year, David Gest, is a perfect example of how the definition has evolved. Very much a talented behind the scenes figure in the entertainment industry it was by dint of marriage to a celebrity (Liza Minnelli) that gave him Reality TV potential.

Whereas fame used to be predicated on the fact that you appeared on TV and did something of note, now you just need to appear - and as ubiquitously as possible.

David Gest’s death merited a 1,120 word obituary in the Daily Telegraph - a newspaper that used to regard Reality TV figures with the same repugnance it has for socialists and immigrants. The fact that some now announce the death of a Reality TV star with the solemnity of Walter Cronkite announcing the death of JFK is, as Prince would have had it, a Sign O’ The Times.

It’s no coincidence that the famous people we are mourning this year mostly come from the entertainment world (Popular Music and Television most specifically). As cultural forms they only achieved mass appeal in the 1950s/1960s. Unlike today’s panoply of Spotify/Netflix/YouTube etc there tended to be a smaller cluster of significant figures in the Prelapsarian days before the Internet.

Those who made their name, and enmeshed themselves into our cultural lives almost like family, from the 1960s onwards are simply, in 2016, reaching an age when their death doesn’t come as a surprise. Sadly, it will only get worse from here on in as all those great musical and popular entertainment icons who once so vigorously embodied youth and coolness, now begin looking in their Latin-English dictionary to see what “Memento Mori” means.

It is instructive to know that that figure in the sprayed-on trousers and frilly, satin shirt wiggling his hips while he suggestively moved his hand down his bare chest last month while on stage in Havana – Mick Jagger – is now a great grandfather.

Those who fought in the entertainment trenches during the 1960s were not exactly following gluten-free, organic diets. “Too much is not enough” was the cheerful refrain in those early days when it came to drink and drugs. As hard as it is to believe now there was a time when taking LSD was quite seriously considered a valuable aid to creativity.

Although many later embraced the welcoming arms of a 12 step programme - David “I have done everything that it’s possible to do” Bowie was famous for his healthy living in the last two decades of his life - the damage had sadly been done.

While these factors combined help in explaining that the “unusual” amount of celebrity deaths is anything but, the main consideration here is how Social Media has been working overtime as an echo-chamber over the last few months.

It’s technically called “Internet Assisted Mourning” - handily abbreviated to “IAM”. We used to passively read about deaths in the newspaper or hear about them on the radio or TV. Now it seems to be a race to see who has their finger first on the “I can’t stop crying. I feel so empty. RIP” button.

Some people haven’t been able to stop crying and feeling so empty to the exclusion of everything else in their life so far this year. As Megan Garber splendidly noted in The Atlantic: RIPDavidBowie was a hashtag; but it was also a private family funeral.

If your “utter devastation” was on a par with David Bowie’s wife, son and daughter, do feel free to throw yourself onto the funeral pyre (and pictures or it didn’t happen); if not the more universal sentiment expressed of sadness might be more appropriate.

With all these deaths - and the year’s early yet - a bizarre virtual graveyard etiquette has emerged in which, you can be accused and charged with not mourning enough. When the journalist Camilla Long noted that “all the people “crying” or “in bits” over David Bowie’s death should man the f**k up and say something interesting” and that the tsunami of extravagantly expressed online grief had “nothing to do with Bowie but more to do with the utter insincerity of social media grief - the odd mimicry and circle-jerkery of it all”, people were able to dry their tears and overcome their “utter devastation” quickly enough in time to threaten her with physical violence.

Online grieving - which may still be in its infancy but shows plenty of potential for growth - is culturally chaotic. Grief Ombudsmen roam New Media, like the Parish Priest at the old Youth Club dance, indicating sternly the correct and appropriate levels of behaviour.

With some members of the Super Famous (fame, like death, has its hierarchies) now entering their 80s and with the first round of the Instagram/YouTube/Vlogging stars only a few decades away - not to mention the Royal Family (ie The Kardashians) this will get a whole lot worse before it gets better.Perhaps the only banal truth to be extracted from the amount of famous people dying so far this year is that their deaths not just sadden us but remind us of our own mortality. The first, and hopefully last words on expressing grief belong to Joan Didion.: “When we mourn our losses we also mourn, for better or worse, ourselves. As we were. As we are no longer. As we will one day not be at all”.

1 Coronavirus: House parties a ‘disaster’ for containment efforts
2 Róisín Ingle: Even Matt Damon has fecked off back home
3 Gardaí disperse crowds gathered at coastal beauty spots
4 George Floyd death: Man shot and killed by law enforcement in Kentucky
5 Simple restorative exercises that can improve your posture after all the sitting
Real news has value SUBSCRIBE