Brendan Simms: Prospect of Brexit should fill Ireland with dread 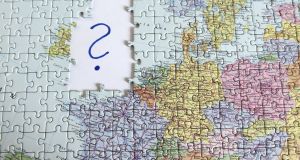 Ireland has recently elected a new Government. The most important vote for the Irish this year, however, will be taking place next door, on June 23rd, when the United Kingdom decides whether or not to remain in the European Union.

The prospect of Brexit should fill Ireland with dread. It could have severe economic repercussions, lead to the re-establishment of border controls as mandated by the EU with a non-member-state outside of Schengen, and reignite tensions in the North. All this is possible, not because of any shift within Ireland or any new problems between Dublin and London, but as a result of Britain’s difficulties with the EU. The Anglo-Irish relationship, in short, will be determined not by a purely bilateral dynamic but by a broader European one.

It was ever thus. The continental context has always been the decisive factor in English, and later British, politics and thus in relationships within these islands. This was mainly because English, and later British, strategists feared that Ireland might serve as the “back door” to England, and rightly so. One claimant to the English throne, Lambert Simnel, was crowned in Dublin in 1487 and backed by the Irish parliament. In the 16th century – especially after the onset of the Reformation which saw England and Scotland become largely Protestant, while Ireland remained Catholic – the entire island became an arena of foreign intrigue, first by France and then the Habsburgs. In 1601 a Spanish expedition to support the rebellion of the Ulster lords O’Neill and O’Donnell was defeated at Kinsale, but it was a close-run thing. Right at the end of the 18th century, revolutionary France sent two expeditions to Ireland; that under Gen Humbert landed in support of the 1798 rebellion. The lesson of all this was clear: what happened in Ireland would not necessarily stay in Ireland.

Throughout all this, London experimented with various ways of dealing with Ireland which went beyond the merely repressive and reactive. In 1494 the English government pushed through Poynings Law, which asserted the supremacy of Westminster over the Dublin parliament. This was intended to ensure no pretender could claim the legitimate backing of the Irish parliament. Later, Britain imposed the discriminatory “penal laws” on Irish Catholics, partly to underpin the land settlement but mainly for fear that they would intrigue with outside powers. English security, in effect, was bought at the price of Irish inferiority.

The planned union had the potential to square all the circles, by addressing the security concerns of London, reconciling Irishmen to each other, and giving them through parliamentary merger a voice in the larger whole (which was often considerable). However, it got off to a bad start when Catholic Emancipation was delayed until 1829, and throughout the 19th century the clamour for “repeal” and then Home Rule grew ever louder. London saw these demands as the thin end of a separatist wedge which would destroy the cohesion of the empire, and weaken its western defences. Ireland, the Liberal Unionist and sometime chancellor of the exchequer George Goschen feared, would become a separate nation “planted on our flanks”.

In 1921, with Irish independence, Britain lost control over her western flank, and struggled more than it needed to during the subsequent battle for the Atlantic against Hitler. Britain was also obliged to provide its neighbour protection against the totalitarian storms of the 20th century gratis (albeit with the help of Irish volunteers in the British army). Independent Ireland called itself a Free State, and then a Republic, but in security terms it was a free rider.

Ireland too suffered. The island was partitioned into two European states, with a Border going up between the six and the 26 counties. Moreover, independence proved to be an illusion. The Irish pound was pegged to sterling and interest rates were effectively set by the Bank of England. Voters resident in the 26 counties, who had once held the balance of power in the United Kingdom, were no longer represented at Westminster. Once again, the really major decisions were being taken somewhere else without any Irish participation.

Entry into the EEC, possible only in tandem with Britain, was supposed to change all this, by using “Europe” to balance Britain economically, politically and psychologically. Unusually among European states, Ireland went into “Europe” in order to contain not Germany, but the United Kingdom.

At first all went well. Ireland boomed economically. Ignorant of the political and economic implications of the common currency – much better understood by London, which remained aloof – Dublin joined the euro. The internal Northern settlement in the “Good Friday Agreement” was embedded within a wider European process of integration which helped to lower tensions within Northern Ireland, across the Border and across the Irish Sea.

The confederal structure of the European Union means the Irish are less well-represented in Brussels than they were at Westminster, perhaps even less than if they were still part of the UK. All this would be made worse by Brexit.

The irony here is that the current margin between the “ins” and “outs” in the UK is much smaller than the electorate of the Republic of Ireland. One way or the other, the prospect of Brexit, which the Taoiseach has defined as a “major strategic risk”, once again threatens to reshape the asymmetric triangular relationship between Ireland, the UK and the continent.

Brendan Simms is the author of Britain’s Europe: A Thousand Years of Conflict and Cooperation (Penguin Press, May 2016) and president of the Project for Democratic Union