Breda O’Brien: Selective outrage is a form of fake news 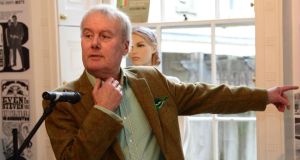 Kevin Myers. “What Myers said about the BBC’s best-paid women broadcasters was ill-mannered and offensive. But is the current controversy really a sacking offence?” Photograph: Dara Mac Dónaill

Fake news is not really a new phenomenon. Certainly, entrepreneurial Macedonian teenagers cynically churning out pro-Trump propaganda websites in order to make money from online advertising were a new development.

Such egregious examples are generally easily spotted. However, selective outrage, cherry-picked statistics and agenda-driven news reporting are far more difficult to notice but are also forms of fake news.

Take selective outrage, such as led to the sacking of Kevin Myers, who has been bombastic, pugnacious and outrageous for many, many years.

It is absolutely right that people should not be subjected to lazy religious stereotyping. What Myers said about the BBC’s best-paid women broadcasters was ill-mannered and offensive.

But is the current controversy really a sacking offence? And if so, why just Myers? Why not the editorial team who sanctioned the article?

Myers, far from being anti-Semitic, is being actively defended by the Jewish Representative Council of Ireland. But selective outrage declares that he must go, even though he has said far worse things about the Catholic Church.

For example, Myers said that the spirit of 1916 was absolutely Catholic. It placed “authority above mercy; power above charity; submission above freedom; consensus above individuality”.

There was no social media campaign condemning such sweeping caricatures as unfair either to the 1916 leaders or the Catholic Church. Nor did anyone say that his description just sounds like any culture at its worst, whether it be Victorian Britain or a students’ union trying to prevent Germaine Greer speaking at a university.

The Catholic Church is always fair game. Except that Myers, at the height of the hysteria which saw an innocent Nora Wall convicted of the heinous crime of rape, denounced the consensus that priests and religious sisters are monsters capable of any crime.

Is being mercurial, occasionally brilliant, sometimes tedious and often gratuitously offensive enough for him to be denied a platform? Is he dangerous or inciting hatred? I don’t think so. But selective outrage says yes.

This was potentialy misleading becuase it was not clear from the CSO press release that the figures of 44 per cent and 59 per cent applied to those households who are actually unhappy with their current arrangements. They accounted for only 18 per cent of those surveyed – a total of 7.9 per cent of parents with preschool children – according to an analysis by the Iona Institute (of which I am a patron). This sort of deeper analysis should be the media’s job.

That most people are happy with their childcare arrangements is not exactly a snappy headline even if it has the merit of being true. As a result, every time there is a childcare debate, the inaccurate figure of nearly half of parents with preschool children dying to send them to creches will probably be trotted out, unchallenged.

Finally, there is the useful tactic of covering news in a way that pushes a political agenda. Myers got into trouble for his rant about equal pay for women, which was inspired by controversy about women earning less as broadcasters.

Listeners and viewers are often anti-women. The few times that I have been on an all-female radio panel, listeners have complained that they cannot tell our voices apart and that having all women is annoying and confusing.

Producers wryly report that they never, ever receive such complaints when it is an all-male panel.

However, while it may be wrong that some women in broadcasting earn less, the lower lifetime rates earned by women in other areas are not so simply explained by misogyny.

However, many women make different choices to men when it comes to paid work over a lifetime. The idea that this is because women are brainwashed into favouring stereotypical gender roles is a somewhat patronising simplification.

My own household is atypical. My husband is the homemaker and I am the wage-earner. However, in my experience, most people would not choose the arrangement that works so well for us.

Even in the world’s allegedly most egalitarian country, Sweden, there are far more women working part-time than men.

Their workforce is one of the most gender-segregated in the developed world, with women clustered in family-friendly public-service jobs or in the lower-paid professions such as childcare workers.

Swedish women also take far more parental leave than men, even though the provision is gender neutral. According to genderpaygap.eu, Sweden has a pay gap of 14.6 per cent while Ireland has a gap of 14.4 per cent.

Is it misogyny, or class or educational differences? Or do men and women prioritise different forms of work and caring? Only the former interpretation is likely to be reported.

Such refusal to countenance more nuanced explanations is another subtle form of fake news. And you’ll hear no outrage about that either.