Breda O’Brien: Free pre-school places about workers, not what is best for children 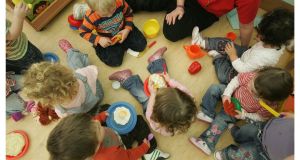 I am getting really tired of advocates of state-funded childcare who make claims along the lines that long-term studies show that every €1 invested in early quality care and education will deliver €7 in improved outcomes. Those studies were conducted on disadvantaged children

During his budget speech, the Minister for Public Expenditure said that investment in childcare has both social and economic returns. It allows people, especially women, to take up work when they want to, and “provides our children with the best possible start”.

In fact, neither of those assertions may be true, based on what happened in Britain when it offered free nursery places. Tony Blair’s government offered free part-time preschool education in England in 1998. By 2007, 88 per cent of three-year-olds were participating.

The returns in terms of increasing workplace participation were small because most were paying for nursery care anyway, so it did not induce a new cohort to choose it.

I am getting really tired of advocates of state funded childcare, who make claims along the lines of long-term studies show that every €1 invested in early quality care and education will deliver €7 in improved outcomes. Those studies were conducted on disadvantaged children.

The most famous is the US High Scope/Perry Preschool project in the 1960s, in which 123 black, impoverished and low-IQ children were given intensive pre-school intervention. Some $15,000-$17,000 per annum was invested in each child, along with home visits by a qualified teacher.

Implying that there is a huge return economically for every euro invested, without the caveat that this applies to highly disadvantaged kids in a massively expensive programme that also intervened with parents, is either disingenuous or badly informed.

In 2005 interview, Heckman was even blunter:

“It is foolish to try to substitute [with childcare] for what the middle-class and upper- middle-class parents are already doing.”

Heckman strongly suggests that interventions should be targeted towards the most disadvantaged, and that the “issues of support for working women and early childhood development need to be separated analytically”.

In other words, Minister, tell us the truth about why you want to provide childcare. It’s not to provide the best chances for children. It’s to prop up a system that sees every adult as an economic unit who must function in the paid workforce.

Many women want to work outside the home, but they also want what is best for their children. They don’t want to feel that they are being forced into one model that only values their salaried work.

We are constantly told we need a Scandinavian childcare model. How about Finland?

Finland provides a monthly homecare allowance of €342 for the first child in the family up to age three; an additional €102 for every subsequent child up to age three; and nearly €66 for every child over three but under school age. This can be used for home care, granny care or neighbour care.

Naturally, I support women working outside the home, as I have always done so myself. I am also completely in favour of high-quality, affordable childcare. Unlike most commentators, I am also willing to point out that the two are very hard to find together.

The Government’s objective, backed by the EU, is not the individual fulfilment of women, and certainly not that children should have the best possible start.

This Government has tattooed on its forehead, “It’s the economy, stupid”. It’s a bit hard to take when it pretends, “It’s the children, stupid”.