Breda O’Brien: Does Mary McAleese understand why people are voting No?

‘If the referendum is passed, there will be children born in this country who will never experience a mother’s love’ 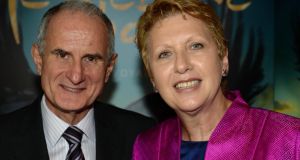 ‘I think I know what prompted Mary McAleese to speak out – deep compassion for a minority in Irish society who have been badly treated in virtually every country in the world.’ Above, former President Mary McAleese with her husband Dr Martin McAleese. Photograph: Frank Miller / THE IRISH TIMES

The media did not always love Mary McAleese, you know. Eoghan Harris got pilloried for calling her a tribal time bomb, but he was just better at soundbites.

Lots of other media people were horrified at the idea that a Northern Catholic might occupy the Áras so recently vacated by Mary Robinson.

In 1997, I supported Mary McAleese in my column, because I thought she was likely to be a great president, and so she turned out to be. Not to mention the wonderful bonus we got in Martin, her husband.

Mary McAleese is a much-loved iar-uachtaráin, or former president. By urging a Yes vote in the marriage referendum, she has departed from what Mary Robinson described in the Seanad in 2011 as an “honourable tradition” of past presidents: that is, not commenting directly on Irish policy and politics.

I think I know what prompted Mary McAleese to speak out – deep compassion for a minority in Irish society who have been badly treated in virtually every country in the world.

What I am not sure about is whether she understands what motivates people who have chosen to vote No.

This is not a referendum on gay people, and whether we care about their mental health, as if only those who didn’t would vote No.

Nor is it about the right to committing to loving another person for life and to say “I do” in front of friends and family. Gay people do that every week in Ireland in civil partnerships.

This is a referendum about re-defining marriage, and therefore parenting.

Mary McAleese is a terrific role model as a woman who has always worked outside the home while maintaining a strong family life. As a mother, she is obviously vital to all her children.

But if the referendum is passed, there will be children born in this country who will never experience a mother’s love.

Research published in 2011 by LGBT Diversity on LGBT Parents in Ireland declares that “the top-ranking, legal change that would have an impact on LGBT parents, identified in both the anonymous survey and the in-depth interviews, is access to civil marriage for same-sex couples.”

It says currently LGBT parents often have children from previous relationships, but that in the future, those who responded indicate that LGBT families would be more planned.

Lesbians were likely to access donor-assisted human reproduction while gay men were hoping to adopt, foster, or in the case of a “sizeable minority”, use surrogacy.

So it is not just scaremongering No voters who have linked marriage and parenting. It is the LGBT community itself.

If two gay men want to conceive a child genetically related to one of them, they usually use two women: one to provide the egg and the other to carry the child.

Has Mary McAleese ever spoken with someone raised by gay parents, who loved both her mother and her mother’s partner but still had this to say: “Gay marriage doesn’t just redefine marriage, but also parenting. It promotes and normalises a family structure that necessarily denies us something precious and foundational. It denies us something we need and long for, while at the same time tells us that we don’t need what we naturally crave. That we will be okay. But we’re not. We’re hurting.”says?

Heather Barwick adds: “I’m not saying that you can’t be good parents. You can. I had one of the best. I’m also not saying that being raised by straight parents means everything will turn out okay. We know there are so many different ways that the family unit can break down and cause kids to suffer: divorce, abandonment, infidelity, abuse, death, etc.

“ But by and large, the best and most successful family structure is one in which kids are being raised by both their mother and father.”

Heather Barwick is a straight woman raised by a lesbian mother. Heather was a gay marriage advocate and poster child for lesbian parenting until her 20s, and it was only when she married a man and had children that she allowed herself to come out of the closet and say that children need both a mother and a father.

Heather Barwick will be in Ireland at the end of next week. It will be fascinating to see how many media outlets interview her, and how many ignore her. And to see whether it might cause a dearly loved iar-uachtaráin to see that it is possible both to love gay people and oppose gay marriage.