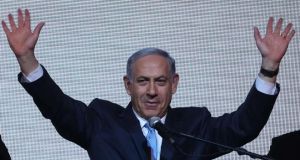 ‘Now, evidently, there is to be no discussion . . . Binyamin Netanyahu will again form a coalition with the pro-settler party of Naftali Bennett, who coarsely calls the Palestinians “shrapnel in the butt”.’ Photograph: MENAHEM KAHANA/AFP/Getty Images

Hello again to Binyamin Netanyahu as prime minister of Israel. He came clean on the eve of the polls, opposing the existence of the state of Palestine alongside Israel.

He has driven a coach and horses through the considered policy of the international community. Peace will come in the Holy Land only when those two states live side by side in peace and security. What should we do?

Recognise the state of Palestine now, as the Irish Senate and Dáil have recommended. It is the only way to safeguard the two-state solution to the long-term benefit of Israelis and Palestinians – and to uphold our own values and our own interest.

Netanyahu’s Likud Party never supported the two-state solution – but for the past six years and until this week, Netanyahu said he did, though his actions belied his words. He maintained the blockade of Gaza, and systematically built more illegal settlements in East Jerusalem and the West Bank – a war crime, and what the Palestinians have described as eating the cake while discussing with them how to share it.

Now, evidently, there is to be no discussion . . . Netanyahu will again form a coalition with the pro-settler party of Naftali Bennett, who coarsely calls the Palestinians “shrapnel in the butt”. He advocates Israeli illegal annexation of the Palestinian countryside, including the Jordan Valley, in the same way Israel annexed East Jerusalem illegally after the 1967 war. Netanyahu’s main opponent in the election, Zionist Union’s Isaac Herzog, will lead the opposition.

The Arab citizens of Israel, 20 per cent of the population, voted in unprecedented numbers (“in droves”, said Netanyahu) and won 14 seats in the parliament of 120. They too will oppose Netanyahu’s stated policies, which risk perpetuating the unacceptable status quo or even creating a “Greater Israel” in which Palestinians inevitably will be victims of an apartheid system.

The Palestinian people have the right to a state based on 1967 lines – a right which Netanyahu seeks to deny. They have the right to self-determination, as the European Union confirmed unanimously as long ago as 1999. They have a political leadership – the PLO under Mahmoud Abbas – which has recognised the state of Israel and is committed to non-violence. Those facts have not changed.

We need to reject a few myths. One is “We can’t want a solution more than the parties to this conflict”. Yes we can. We can and do want the just and equitable solution – two states living side by side in mutual security, with parity of esteem and mutual respect. That outcome is consistent with the values we uphold, and with our own interest to resolve a conflict in which we (the West) face the accusation of double standards. We should act in aid of that solution. Now, we need to act to save it, for it is in clear and present danger.

Another myth is “Leave it to the two parties to sort it out”. That was never a runner, given the vast disparity in power between them. Israel controls the land, sea and air of Palestine.

A third myth is that the United Nations has no role in resolving this conflict. What we need is what Kerry did not do (because Netanyahu was averse) – to agree unanimously a UN Security Council resolution establishing the framework and timeline for the two-state outcome we seek.

Certainly, we need the United States – essential, but not sufficient alone to deliver an agreed peace. We need the collective will of the UN, bringing together the US, the European Union and the Arab states, particularly Israel’s peace treaty neighbours Egypt and Jordan. Ireland, as a determined, highly credible advocate of the UN and major contributor to UN peacekeeping efforts, has a key part to play here.

Recognition of Palestine on 1967 lines is the logical step now for all states committed to an equitable two-state solution. Recognition serves three purposes: giving hope to the beleaguered would-be peacemakers in Ramallah, whose readiness to negotiate is so heavily criticised by Hamas and by mistaken advocates of futile violence; signalling to Israelis that there will indeed be a sovereign Palestinian state, so Israel’s leaders need to shape an agreement, not rule one out, and showing to the world and to ourselves that right matters more than might. Sweden showed the way when it recognised Palestine last October.

What of my own country, you may well ask? I may yet be pleasantly surprised, but I expect no more than sincere expressions of concern from London before the May 7th general election. What the UK does then depends on how we vote – Labour, the Lib Dems, the Scottish National Party and the Greens see recognition as a Palestinian right, not a privilege. As do I. Vincent Fean was British consul general, to Jerusalem from 2010 until his retirement from the diplomatic service last year.