‘I have been told by national radio stations that in order to discuss my history book, there must be someone present who opposes rights for gay people’ 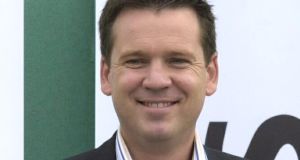 ‘I wrote about the ramifications of a ruling the Broadcasting Authority of Ireland made on the Derek Mooney show Mooney Goes Wild, where a discussion on marriage equality took place.’ Photograph: Cyril Byrne

In August, I wrote about the ramifications of a ruling the Broadcasting Authority of Ireland made on the Derek Mooney show Mooney Goes Wild, where a discussion on marriage equality took place. The BAI said the programme “included the presenter making a statement in respect of changes in Irish law in respect of same-sex marriage that entailed the articulation of a partisan position on a matter of current affairs.” The National Union of Journalists criticised the ruling, saying, “The BAI would appear to be singling out discussion on so-called same-sex marriage, imposing restrictive conditions even before the Government has provided wording on a possible referendum on civil marriage equality, never mind setting the date.”

In November the BAI upheld a ruling against the Newstalk presenter Chris Donoghue when he stated his preference for hypothetically voting for marriage equality during an item on the show about the history of gay rights. “This decision is daft and depressing in my opinion,” Donoghue said in response to the ruling, “This was not in a debate or a comment I made in a vacuum. This was a 20-minute discussion on the eve of Dublin Pride 2014 about a range of issues affecting gay people in Ireland.”

I’ve written a history book. It’s called In the Name of Love, and it launches tomorrow evening. It’s an oral history about a social movement, the movement for marriage equality in Ireland. In this book are over 70 interviews – ministers, journalists, activists, academics – pieced together to document the legislative and social change that has occurred in Ireland in relation to rights for gay people.

Journalists and broadcasters are going to look back on this period, this farcical, Orwellian time, with nothing but embarrassment. It is beyond ludicrous that this ruling is so far-reaching that you can’t talk about history without a spoiler in the room saying gay people aren’t equal. It is not enough to censor the future and the present, it seems.

Listeners need to know what is going on. They need to know how this one issue is being zoomed in on. What we don’t know is the “why”? Whose interest is this in? Why is this happening?

On Friday, I had a conversation with Mona Eltahawy, the Egyptian feminist, journalist and activist at The Eliz Women’s Speaker Series in Trinity College. Eltahawy quoted César Chávez, the Latino American farm worker and civil rights activist, whose slogan ‘Sí­, se puede” was co-opted by Obama as “Yes we can.” Chávez said that social change was like teaching people to read or write, you cannot then unteach them to read or write. Once people see change, they cannot unsee it. This social change in Ireland is happening. However the debate is framed or distorted, it’s a change that cannot be unseen.

Asking a gay journalist to sit in a studio and take the punches from a person who campaigns on maintaining the status quo of their inequality is upsetting and unfair. I feel bad for good broadcasters, producers and researchers being put in this position by the BAI, which makes rulings in response to complaints. We need to challenge these rulings and question who they serve. We need debate. But we also need truth, and we need empathy. This is not an abstract. This is people’s lives.

I know how tough it must be for a gay kid who’s going to school and listening to that on the radio in the car wondering if their parents are nodding along. I know that rhetoric has real life consequences. And I don’t want to be put in a position where I am colluding in that or somehow facilitating that rhetoric. And I don’t want to put myself in a position where I will be victimised.

It’s not about winning an argument, as the argument has already been won. I can wipe the floor with any anti-equality argument, but real censorship happens before you even open your mouth. Ireland has seen this social change. There is now something very dark about not being allowed speak about it.

1 Connell losing touch with the club championship is the real tragedy of Normal People
2 Irish tourists excluded from visiting Greece as country begins its tourism season
3 We need to pay very close attention to what is happening in Britain now
4 Coronavirus: Nine more deaths reported in the Republic
5 SpaceX crew onboard rocket ahead of landmark launch from Florida
Real news has value SUBSCRIBE