As recovery picks up we must revisit underfunding in third level

Pressure on college students is acute and unsustainable 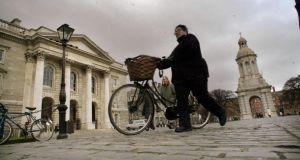 Trinity College’s newly-launched Strategic Plan begins with the declaration that “Trinity as a community is ultimately defined by those who are enrolled as students”. Photograph: Dara Mac Donaill.

The current funding model of Ireland’s higher-education sector is unfit for purpose, and exerting a very real negative influence on the quality of education. The pressure on students is acute and unsustainable.

Reflecting on the end of my term as president of TCD Students’ Union, I am saddened when I note the common thread linking so many of the issues faced by students I have met.

I think of a Brazilian PhD student who came to the union office in November because he no longer felt safe in the hostel where he had been living for eight weeks. I think of the student who heard that college was going to introduce a €250 charge for failing an exam and contacted me over Christmas, worried she had failed three. I think of a geography student who picked the subject because of her interest in cities and urban geography, but who was told last week this core module may not be taught because of a retirement the department cannot afford to replace.

I think of a survey the students’ union did just last week, of students in midwifery, 90 per cent of whom do not have time to get involved in an extracurricular activity and 70 per cent of whom have felt under such pressure they’ve considered dropping out. The pressure, however, is felt by all students, and – judging by alarming, increasing levels of staff sick leave – the community as a whole.

As a nation we have heard the word “resilience” so many times in recent years. Like patches on a disintegrating roof, it is hoped the subjects of an endless stream of “tough decisions” will simply take cover under the term. In Trinity it is precisely the same. However, from August’s accommodation crisis through to April’s new student charges, students’ resilience is running low. Frankly, it feels like the roof is crumbling .

Trinity’s newly launched strategic plan begins with the declaration that “Trinity as a community is ultimately defined by those who are enrolled as students”. However, unfortunately, within Trinity and the sector, this definition has been forgotten – real issues faced by real students simply do not have much sway, replaced by a neutered language of numbers and statistics. However, in this language, too, the facts speak for themselves: State funding in higher education has dropped by a devastating 32 per cent in the last six years. Ireland boasts four universities in the top 300 internationally; however, if universities were ranked by budget alone, not one Irish university would rank among the top 300.

But these are not just lines on a graph, or numbers on a balance sheet. They represent people, real students. Something has got to give. A fundamental, transformative change is needed in how we, as a society, value our higher-education institutions. Needless to say, these statistics do not feature in Trinity’s prospectus. However, simply patching over and maintaining a glossy veneer is woefully short-sighted. A problem cannot be solved without being acknowledged: our universities are in crisis.

In the context of the seismic year ahead, inaction is particularly unforgivable. A speech once a year from the provost or a tokenistic march once a year by USI simply will not suffice and will not bring funding into the public discourse.

The Cassells Working Group on Third-Level Funding will report back later this year, and a general election looms with students now registered to vote in numbers never seen before. More importantly, though we disagree on the solution, both staff and students are agreed on the problem, and on the need for a discussion from first principles: the current funding model of third level is not good enough, from our shamefully inadequate access mechanisms to our outdated grant system to our “free fees” that are the second-highest in Europe.

We as students are faced with a choice between dejection and outrage and, from the National College of Art and Design to Trinity, increasingly we are opting for the latter. Alexis De Tocqueville remarked “it is not always when things are going from bad to worse that revolutions break out”; amid talks of recovery that remain theoretical and disconnected, years of simmering discontent are close to boiling over. I have articulated these thoughts in the hope others will agree and a movement can be set in motion: students, in Trinity and elsewhere; staff, who too often protest in silence and overlook the extent to which their frustration is shared; and the provost and senior management of all our third-level institutions.

Convictions of mind and heart

Irish society will depend on the fruits of our higher-education sector to be not only the taxpayers, but the innovators, thinkers and leaders on whom societal hopes of recovery and transformative change have been staked. But it is only empowerment of our students and empowerment of our educational institutions that will bring about the better Ireland all of us long to see. I urge Trinity and governmental leaders alike to recognise that it is now that those seeds must be sown.

1 Dangerous student stalker sentenced to seven years in jail
2 Trump says, ‘I have the best words.’ Now this comedian’s going viral for lip-syncing them
3 We need to pay very close attention to what is happening in Britain now
4 Brazilian gang held in Offaly had sub-machine gun and student visas
5 All students will not return to school even if social distancing rules are relaxed – McHugh
Real news has value SUBSCRIBE