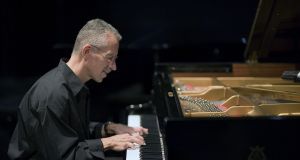 Writing in advance of Keith Jarrett’s Dublin concert this week, Des O’Neill (Heath supplement, Tuesday) considered the great jazz pianist – 70 this year – from a gerontological point of view. At the actual show, later that day, I found myself thinking about the musician in the context of lung diseases.

Jarrett is well known for being irritated by excessive audience coughing. And this is perfectly understandable – many audience members are irritated by it too. But I had to wonder about the wisdom of inviting such a notoriously sensitive performer to Ireland, a country with a collective bad chest. And in November, of all months.

As usual, before a winter show, the National Concert Hall sounded like the emergency ward of a 19th -century sanatorium. No doubt some of the coughing was pre-emptive – an attempt to clear the pipes in advance. Even so, it sounded as if large parts of the audience had galloping consumption, and that they wouldn’t all survive the night.

I reflected again on the historic Irish susceptibility to lung problems, including TB and asthma. Was it genetic? Was it the damp climate? And more frivolously, I wondered if scientists anywhere had yet proven a causal link between classical music venues (churches too) and coughing.

My theory about the latter is that, even if you’re feeling well before you enter such places, the increased awareness of mortality inspired by Mass or Mozart’s Requiem in turn leads to an increase in imagined respiratory ailments.

But whether that’s true or not, it seemed clear at the NCH that the star’s reputation was adding to the problem. Traditionally it’s the performer who feels nerves before a show. Here, the paying customers were having butterflies too, especially after the man introducing the concert intimated that Jarrett was only playing in Dublin again because the last audience had behaved so well. Talk about pressure.

In fairness to the pianist, there are things that annoy him even more than coughing. Photography, for example. At the start of a show in Italy two years ago, after someone disregarded the warnings and took a picture, Jarrett ordered all the stage lights turned off and then played what one local critic called a “phoned-in” performance in the dark.

And it’s just as well that throat-clearance is not quite as big a deal-breaker for him, because even though Tuesday’s audience was clearly exercising enormous restraint, it did continue coughing intermittently throughout.

In fact, at one point, a man beside had something approaching a seizure, as he tried to suppress a tickler and, instead, it went viral on him. Mercifully, he regained control of himself before we had to smother him.

Perhaps, by now, non-Jarrett fans among you are wondering why audiences would subject themselves to the whims of so demanding a performer when they, not he, are the ones paying?

Well, in part answer, there are at least some critics who think that Jarrett is not just the greatest jazz musician alive, but the greatest musician. And even if you don’t go that far, there’s no doubting that, from the moment he starts weaving his never-repeated patterns on the piano keys, you are in the presence of genius.

This also excuses his own idiosyncrasies, including a tendency to hum along to the music, and not always with the same tune he’s playing. He also stands up frequently at the piano, or rather crouches, like a jockey – as if the instrument is a four-legged animal of another kind and they’re both approaching a fence.

None of which distracted from the sublimity of his performance this week. Nor, happily, did we distract him, except for one scoundrel (possibly a member of the Instagram generation, suffering withdrawal after two hours without a selfie) who sneaked a picture near the end, provoking a minor confrontation.

It was too late by then for a walkout, or turning the lights off – Jarrett had already played two encores. But there was a faint hint of revenge in the choice of his third and valedictory piece, Danny Boy.

Just when we thought the worst was over, here was the ultimate test – the most melancholic musical reflection on mortality ever written, performed in a classical venue. Could our ravaged lungs hold out until it was over? Heroically, they did. Danny’s mother/father/lover was nearly dead by the end of the song, as usual, but there were no other casualties.

Before leaving the stage for the last time, Jarrett told us we were a very good audience, and assured us he didn’t often say that. We had no trouble believing him, on both points.

1 ‘He was some man’: Shane’s journey from care child to fearless activist
2 Mary Lou has to call for the smelling salts as SF councillor deals a knock-out blow
3 Chris Hadfield on the climate crisis: ‘The world has seen much, much worse’
4 Netflix: The best 101 films to watch right now
5 Ross O’Carroll-Kelly: I hate my father-in-law the same way dogs hate lampposts
Real news has value SUBSCRIBE