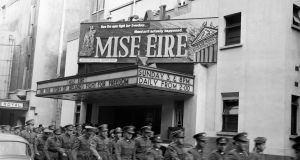 ‘Music’, announced Seán Ó Riada on that first day, “Is the organisation of ideas through sound.” We music students, in the antechamber of the Easter Rising golden jubilee and fresh from school, were flummoxed. What ideas? What sound?

That half centenary – 1966 – is often dismissed; overshadowed by, sometimes blamed for, the Troubles that followed. But memorialising plays tricks. Like memory plays tricks: psychologists say it is our trickiest faculty, prone to embellishment or censorship. 1966, like 1916 itself, suffers from commemorative amnesia.

The early 20th century saw more than one revolution in Ireland. There was another, subtler and deeper in the blood – a cultural revolution. All over the country, young Irish women and men passionately embraced the Irish Revival: studying the language, poetry and drama.

Through the eternal prism of Edwardian plate photography we know them, Gaelic League groups, amateur dramatic groups, GAA groups. The imagination knows them better – their shades flickering on the boreens of Corca Dhuibhne and Connemara. But for many, those lyrical laneways led inexorably to the harsh crossroads of rebellion and took them to death or Kilmainham or Frongoch in Wales. And all that joy was lost for generations. Half a century later, Seán Ó Riada emulated that romantic moment. And his achievement is the lasting legacy of the second cultural revolution. Putting his avant garde dream in France and his meal ticket at the Abbey behind him, he took his young family to Brú na Gráige in the Dingle peninsula to learn to speak like a native and to develop his theories on sean nós, the traditional music he revered, revived and is credited with re-inventing.

Now in 1966 he was a cultural colossus – teaching in UCC and imparting, surprisingly shyly, those theories to anyone interested. Irish traditional music, he claimed, was circular in form (like Indian or eastern music), improvisational in nature (like jazz) and regional in practice (embellishment varied like accent). He could build an existential treatise on the uses of the glottal stop in Cork or nasalisation in Kerry.

The Lemass plan for 1966 was to celebrate the modernisation of Ireland. But the soul-searchers at Gael Linn, some years earlier, commissioned the film and soundtrack, Mise Éire. It became overture, prelude and reveille to the golden jubilee. When we were brought from our convent school to see it, George Morrison’s cinematic masterpiece was already acclaimed. But that day in the cinema in the early sixties, I only had ears.

Ó Riada was subversive as an artist. And as a lecturer. He created a Nordic flourish as he strode into the idyllic music room in UCC: blond hair, flowing gown, even his white eyelashes compounding the sense that he had walked out of an Ingmar Bergman film. His classes were neither consistent nor compelling. His great contribution was extracurricular. He nailed tacks into the hammers of the grand piano in the Aula Maxima in UCC to make it sound like a harpsichord.

His legend was of drinking with boon companions, but I, for one, was the beneficiary of tea and cakes and his thrilling tales (mostly anticlerical) in Thompson’s cafe in town.

His anticlericalism was post-Parnellite and unforgiving (there were nuns in class and he could be hard): his republicanism was classical and embracing. And he was a bit of an elitist: he was teasable on the matter of his “Ceol na nUasal” - he never produced a “Ceol na nIsle”. When in town he stayed with Garech de Brún in Luggala.

I don’t know whether the cigarettes he smoked were actually Gauloise, but the whiff of the boulevard clings in my memory. He was profoundly cosmopolitan and his classical compositions were in the contemporary European tradition. By 1962, he had relocated to Cúil Aodha, a beautiful village in the Muskerry Gaeltacht. Some might see this as a paradox - the cosmopolitan in Cúil Aodha. Not Ó Riada. It housed 32 poets, he said and he meant it. He was at one with his great friend John B Keane, who saw all humanity pass beneath his window in Listowel.

It was a Camelot

I last saw him in the summer of 1971 at the bar of An Muileann, in Cúil Aodha. He was subdued, drinking tea. A mere two years had elapsed since the Gaiety triumph, but it was a seismic two years. In terrible revolutionary fall-out, his music was being expropriated by a republicanism so toxic those who loved it feared for the association. The epic clash of cymbals had become a clash of symbols.

He died three months later, aged 40. The nation mourned, but to paraphrase Yeats, we knew his dream, enough to know he had dreamed and was dead.