Poet’s behaviour mirrors that of many patriarchal institutions, particularly – and ironically – the Catholic Church 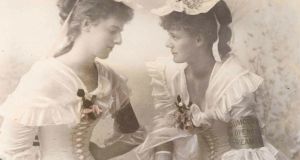 So is Romantic Ireland dead and gone? As the last embers of Yeats 150th birthday die, it seems as good a time as any to interrogate a poetic cliche.

It’s fair to say that since one day last May, Ireland is now a far more romantic place, one which might have provided a warmer house for some of Yeats’s subjects including, perhaps, his mentor and muse for those very lines, confirmed bachelor John O’Leary.

Would Yeats have approved the referendum result? Probably, given his empathy with the “green carnation” generation. Which makes all the more perplexing his dismissal of Eva Gore-Booth, whose politics and proclivities scratched some sore in him, but may also provide a peep-box into his complicated thinking on women and sex.

Last week, the Irish Embassy in London hosted the Josephine Hart Poetry Hour’s second tribute to Yeats this year. It was a fitting venue, replete with the traditional sanctity and loveliness that permeates his poetry.

Dan Mulhall, our redoubtable man in London, had, like all ambassadors in the developed world, spent much of that day on national security matters. Uniquely perhaps, he then segued seamlessly from security to poetry. He not only played host, but played the late Josephine Hart, reading her oration, and making it his own, with subtle additions and thespian flourishes.

As prescribed by Hart, to be understood, great poetry is read aloud by great actors. Simon Callow and Brian Kennedy gave it their all. But it was Sinéad Cusack who truly mined the meaning. In a kind of lyrical kinesics, she didn’t so much read as embody the poetry, beating out the incantations as though the lines were in her DNA. And thanks to her and to Josephine Hart, I leave this year, casting a colder eye on our beloved bard.

The first romantic imprinting to which young students of Anglo-Irish literature are exposed is the love story between himself and Maud Gonne: handsome young poet falls hopelessly, and unrequitedly, in love with beautiful young woman. He dedicates his life and his art to her although he has other women friends.

She, meanwhile falls for highly unsuitable men: one married, with whom she has two children; another a domestic abuser, whom she marries. Commitment-phobe (what better excuse than “My heart belongs to another”) meets love junkie. Not exactly role models. But the stuff of great, inspirational poetry? So we suppose.

But Yeats, in elevating Maud Gonne to goddess status, denigrates others. In this he mirrors many patriarchal institutions, particularly – and ironically – the Catholic Church, which elevated the Virgin Mary to the denigration of others. He is kind to, and writes affectionately of, Augusta Gregory and others who afforded what Rupert Brooke called “sleepy-mother comfort”.

But not Constance and Eva Gore-Booth. Everyone remembers the two girls in silk kimonos. We remember, too, his harsh judgment of the militant Markievicz, “conspiring among the ignorant”. But Eva, her sister, remained largely hidden from history, thus the cruel ending of that verse remained for almost a century, her epigram.

“I know not what the younger dreams,

Some vague Utopia – and she seems

When withered old and skeleton gaunt,

An image of such politics.”

What did beautiful gazelle Eva do to be so spurned?

We know that as a young woman, encouraged by Yeats, she wrote poetry. She continued to write all her life, founding and editing, along with her life partner Esther Roper, a feminist magazine, Urania, dedicated to challenging society’s gender norms and celebrating same-sex love. Perhaps her sin was leaving the tower to live among the masses in England – even becoming a colliery lass to experience the privations.

Some vague Utopia, he sneers. But Eva Gore Booth was neither vague nor a Utopian socialist. As Sonja Tiernan’s important new collection of her writings reveals, she campaigned tirelessly on very specific issues: the rights of barmaids, prostitutes, textile workers, conscientious objectors.

Given her prolific writings, including to the national press, Yeats cannot have thought her activities “vague”. Could his target have been “some vague Urania?” It means love goddess, but also “Dreams” – the word he uses to interrogate her.

Urania published articles which were radical and prescient: about sex changes and other scientific methods – methods with which we know Yeats engaged. “Withered old and skeleton gaunt.” Is the image of such politics? Or of an ageing poet?

Yes, she had a fever at the core. Had she been a man he might have granted her the “delirium of the brave”. She didn’t believe in marriage, but I believe she would be happy to know that romantic Ireland is alive and present. Especially since one day last May.