An Irishman’s Diary on Friedrich Engels and Ireland

A land run by police, priests, lawyers, bureaucrats and squires 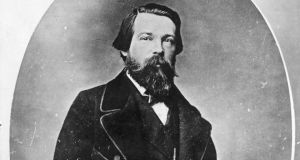 Friedrich Engels, co-author of The Communist Manifesto, was fascinated by Ireland and the Irish question. Engels visited the country at least twice during his lifetime, he attempted to learn the Irish language and even planned to write a history of Ireland. His interest in Ireland was no doubt spurred on by his opposition to British imperialism and capitalism.

When he visited Ireland in May 1856, he wrote to his friend, Karl Marx, describing his trip which took in nearly two-thirds of the island of Ireland. To Engels, Dublin had the character of a one-time small capital and the whole country, especially the towns, looked like France or northern Italy. It was a land run by police, priests, lawyers, bureaucrats and squires with a total absence of industry. It seems that Engels’s one abiding memory from this visit was the pervasiveness of ruins dating from the 5th and 6th centuries right up to the 19th century. This included ruined churches and castles as well as ruined peasant houses.

It was in Manchester that Engels first came across Irish people. He moved there at the age of 22 to learn about the family business. The son of a wealthy cotton textile manufacturer, Engels was born in the German industrial city of Barmen which was sometimes referred to as the “Manchester of Germany”. At the time, Manchester was one of the greatest industrial powerhouses of the world, a great “shock city” which was known as Cottonopolis on account of the number of mills.

Many Irish who had sought refuge and work in Manchester during the Famine ended up living in slums which were named “Little Ireland” and “Irish Town” and working in construction and in the cotton mills. Not long after arriving in Manchester, Engels met Mary Burns, a working-class Irish immigrant who lived in the city. It was Burns who introduced him to the poverty of the slums and informed him about the precarious situation that many Irish immigrants found themselves in. Engels lived with Mary Burns until her death some20 years later. They never married; marriage would have been too much of a bourgeois institution for Engels.

Prior to leaving Germany for Manchester, Engels was already socially and politically aware, writing under a nom de plume in local newspapers about social inequalities in his home town. Once in England, he immersed himself in the class struggle, finding out about the mass movement for democratic rights known as Chartism as well as attending regular lectures on English society and politics.

Engels worked in the mill by day and visited the slums by night, preparing notes for his book about the lives of the working class, The Condition of the Working Class in England. It has to be said that he was not very impressed by the Irish he met in Manchester’s appalling slums. He found them living in poorly ventilated cottages and damp cellars in dilapidated streets and came to the conclusion that they were a race that had reached “the lowest stage of humanity”.

Mary Burns was the catalyst for Engels’s lifelong interest in the cause of Ireland and the Irish people. She accompanied him on his first trip in 1856 when they travelled around the country from Dublin to Galway, covering a distance of between 450 and 500 miles. In letters to his collaborator, Karl Marx, Engels makes a good job of describing the geography of the country and what he calls “the tangible reality” of the Famine. Engels observed many deserted villages, where the only inhabitant left was the landlord in his well-kept estate.

Engels’s second trip to Ireland came in September 1869 when he travelled with Mary Burns’s sister Lizzie and Eleanor Marx, daughter of Karl Marx. On this occasion, they visited Dublin, the Wicklow Mountains, Cork and Killarney. In a letter to Karl Marx, Engels mentions that Ireland’s trade has grown in recent years and says that the port of Dublin was now unrecognisable. In a sign of the increased levels of trade, Engels adds that he heard many foreign languages being spoken on the quay in Cobh, including Italian, Serbian, French, Danish and Norwegian. Engels finishes his letter by saying that “the worst thing about the Irish is that they become corruptible as soon as they stop being peasants and turn bourgeois”, but adds that that is the case with many peasant nations.

Engels had an ambitious plan to write a “History of Ireland”. He collected an enormous amount of material in 15 notebooks and even studied Irish in order to fully understand his topic. The book remained unfinished at the time of his death in 1895.

1 Coronavirus: Death rate from Covid-19 in Ireland rises to 2.4%
2 Netflix: 10 of the best new shows and films to watch in April
3 Coronavirus in Ireland: New powers of arrest for gardaí expected to come into force
4 Tony Holohan admitted to hospital after feeling unwell during coronavirus briefing
5 ‘On the bike I meet no one’: 78-year-old cyclist refuses to cocoon
Real news has value SUBSCRIBE