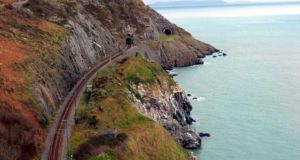 “The Darts and mainline trains that rumble along the line at intervals are part of the ambience of the path and of its origins.”

One of the most enchanting and interesting scenic paths in this country is the one that clings to the steep slopes of Bray Head over the sea. It runs parallel to and just above the spectacular stretch of railway line that links Bray with Greystones.

In fact the path was carved out over 160 years to carry men, rudimentary machinery and materials in the construction of one of the most demanding and difficult feats of railway engineering.

The line slants upward from sea level to hug the seaward side of Bray Head. In several places it tunnels its way through the hard pre-Cambrian rock to emerge into the open again and then disappears into a final tunnel above Greystones. Railway and path are a tribute to two of the greatest railway engineers, William Dargan and Isambard Kingdom Brunel. The latter, a Briton of Huguenot descent, had an initial role in tackling this very difficult challenge. But it was left to Dargan, a farmer’s son from near Carlow, to take up most of the work.

Several stretches of the supply path had to be blasted out of the slopes. You can put your hand on the grey striated rock, millions of years old. Much of it is now decorated with little patches of white lichen. Hardy mosses and little wild flowers have found homes even in some of the most minute crevices.

The mainline and Dart services give passengers a great sight of the waves surging white against the brown sea-soaked rocks below and the ever-changing cloudscape above it.

One rocky outcrop washed by the sea is home to a colony of cormorants. They stand rigidly for hours, sometimes spreading their wings to dry like a heraldic symbols. You see one settling on the sea surface before suddenly plunging down searching for fish.

In springtime the nooks and crannies just below the path resound to the screeches of breeding fulmars – the rapid beat of their straight wings set in the centre of their bodies distinguishes them from the seagulls that also glide around.

Sometimes a very large gull passes overhead with heavy wingbeats. This is the great black-backed gull, an unwelcome predator of the eggs and chicklings of the smaller gulls.

Groups of people stop, pointing down at the sea and sometimes using cameras or phones. It’s usually to watch a seal poking its smooth, whiskered head above the water below or to wait for a dolphin rising rapidly from the waves, curving its body and sliding down into the sea again.

The elation that this cliffside walk evokes creates a kind of camaraderie among sightseers. They exchange nods and greetings and sometimes stop to chat to one another about something they’ve noticed. It would never happen if they were walking along the promenade down below in Bray or in the street of a town or city.

One of the unusual facets of this path is that a large number of those who walk along it regularly come from countries where most of the populations have rarely been able to experience the fascination of watching the sea meeting the land.

A Polish family told me that this is a favourite walk of the large Polish community in the greater Dublin area. Most had lived miles inland. They themselves came from Krakow and would have to drive for five or six hours to reach the sea and then only the bleak, grey Baltic.

The same goes for the many nationalities one meets, Lithuanians, Brazilians and indeed people from such countries as Spain and Germany. It’s easy for us to forget that we’re an island nation and to take for granted the sight and sound and smells of the seashore.

One of the delights of the regular walker is to see the transformation of growth from winter to spring. The semi-dormant clumps of furze only flower weakly, if at all, in winter. But come March and April they burst into a brilliant orange and cover much of Bray Head. The slopes that reach up to the skyline are brown with the withered remains of last year’s bracken. Close up, the old stalks are tangled and mashed and it’s hard to imagine that new green ferns will ever appear again. Yet within a week, delicate green stems emerge from the brown morass, spring above it and then put out little shoots. Within a few weeks the slopes are turned from a weathered brown to a lush bright green.

The Darts and mainline trains that rumble along the line at intervals are part of the ambience of the path and of its origins. There is another reminder in the form of heavy wire netting bolted and stretched in places above and below the path. This is to try to contain the rocks that occasionally break free from the exposed rock-face. The grooves and furrows are vulnerable to frost and warm sun and weather.

It’s a rare enough event but linesmen patrol the railway, on the watch for any stray debris.

I don’t think William Dargan could ever have imagined how much delight and pleasure his railway and the path above it would give to so many people from so many countries so many years later.