An Irishman’s Diary on Basil Zaharoff, the ‘mystery man of Europe’ 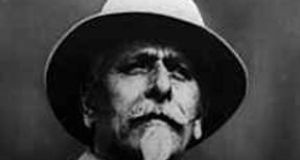 Basil Zaharoff: known as the “merchant of death” for his links to arms trade

Basil Zaharoff was a friend to prime ministers and world business leaders. At one time, he was said to be the richest man in Europe, if not the world. However, there was a dark side to Zaharoff which earned him the loaded nicknames of the “mystery man of Europe” and the “merchant of death”.

Above all else, Zaharoff valued his privacy. He was extremely reluctant to answer journalists’ questions about either his origins or his career. As a result, everything about him became shrouded in mystery.

Even today, more than 80 years after his death, there are still many question marks hanging over Basil Zaharoff. Where and when exactly was he born? What effect did his dealings have on the conflicts for which he supplied arms? These questions remain unanswered or only half answered.

What is clear, however, is that Zaharoff was a successful international arms dealer and financier. He rose from humble origins to become tremendously wealthy and both respected and maligned in equal measure in his own lifetime.

The vast personal fortune that he amassed was used to buy mansions on some of the most exclusive avenues around the world, including Unter den Linden in Berlin, Kärntner Strasse in Vienna and the Champs-Elysées in Paris.

It is believed that Zaharoff was born to poor Greek parents in what is today Turkey in 1849. His first forays into business were not very positive and perhaps a telling sign of what path he might take in later years. In Constantinople, he worked on the fringes of prostitution (as a brothel tout) and arson (setting fires deliberately that were then put out by the city’s fire brigade).

He went to work for his uncle in the cloth trade in the city and then made his way to London in the early 1870s, where he married an Englishwoman. In 1873, he went on trial for embezzlement at the Old Bailey.

Ten years later, after moving between London, the United States and Cyprus (where he became involved with the Swedish arms manufacturer Nordenfelt), he made his way to Ireland.

Working as a shipping agent in Galway, his job was to encourage Irish girls to work in factories in the US. Sadly, not much is known about his time in Ireland.

In the late 1890s, he went to work for the UK arms manufacturer Vickers.

During the first World War, as well as selling arms to whoever would buy them, Zaharoff acted as an agent for the Allied Powers.

After the war, the British and French governments both bestowed honours on him to acknowledge the work he did for them.

Not surprisingly, questions were raised in parliaments and in the press about this enigmatic figure who had the ear of politicians, royalty and businessmen everywhere. He was a trusted confidant of David Lloyd-George and the Greek prime minister Eleftherios Venizelos. In 1921, in the British House of Commons, while attacking Lloyd-George’s pro-Greek policy, Walter Guinness MP, referred to Zaharoff as the “mystery man of Europe”. This was on account of the influence Zaharoff had over the British prime minister.

His life story reads like a work of fiction, so much so, that several writers took inspiration from it to create characters for their books and movies.

A doppelganger named Basil Bazarov appeared in one of the Tintin comic books. The man wore a distinctive coat and hat like the kind worn by Zaharoff and had a white goatee beard like the man himself. The comic book Zaharoff worked for an arms manufacturer named Korrupt Arms, which supplied arms and munitions to two fictional South American governments who were engaged in a battle over oil fields. A case of art imitating life, perhaps?

Understandably, Zaharoff was eager to change the narrative that was associated with him. He wanted his name to become linked with something a little more positive. To this end, he donated money to the Sorbonne University and Oxford University to establish chairs in English literature and French literature. He also endowed a chair of aviation at Imperial College London and one at the University of Petrograd.

In old age, Zaharoff spent time in Monte Carlo. It was here that he heard the Irish opera singer, John McCormack. Zaharoff was a big fan of the tenor and on one occasion even invited McCormack and his wife to dine with him.

Zaharoff died in the Hotel de Paris in Monte Carlo in November 1936. Vandals tried to break into his coffin the following January. They raised the slab of the vault but did not manage to break into the coffin. It was rumoured that they were trying to find the coffin of his late wife as it was thought that she was buried with her jewels.

Even in death, Zaharoff attracted attention.