An Irishman’s Diary on a photographic memory 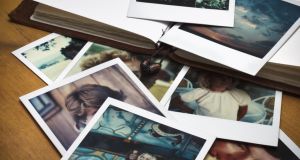 “I’ve taken the step of digitising part of my small collection on to a laptop. Not this one, however, this 46-year-old rectangular piece of colourful cardboard with the frayed corners.” Photograph: Thinkstock

Heaven protect me from asinine “selfies” and snaps on mobile phones (you couldn’t dignify them with the name of photographs). But I’ve taken the halfway step of digitising part of my small collection on to a laptop. Not this one, however, this 46-year-old rectangular piece of colourful cardboard with the frayed corners.

From Kennedy Airport, down through Jackson Heights, over the Triborough Bridge and into Harlem. The taxi-driver reaches back and snaps down the locks on the passenger doors.

“Is that for security?” asks the rube from the back seat, newly arrived from Ireland.“Yeah, it’s better,” comes the laconic reply. This was Harlem in 1968.

Even though I lived next to it for a year, I ventured into Harlem on foot only once, and that was in a group. We walked down W125th Street, past the Apollo theatre, to the train station, conscious of electricity in the air.

It was only a few weeks since ghettos across the country had exploded. On our arrival at Larchmont, on Long Island Sound, the social environment transformed radically. We were met by our professor and his wife, she driving the Rolls-Royce, he the Corvette Stingray.

But to the photograph. It shows an array of bright-eyed and bushy-tailed students, myself included, in the professor’s garden. Here is Marie-Alice, beautiful, blonde and part-time model, from Paris, but living with her family in a duplex apartment on Park Avenue with Chinese servants, because Papa is French ambassador to the United Nations. She invited us to coffee and cake there one afternoon. I think it was the first time I experienced one of those lifts that open directly into the apartment, a true pointer to privilege.

My friend Inderjit and his wife Shama, from Delhi. His mother was the daughter of a maharajah, who had been prime minister to one of the nabobs. I spent Christmas Day with them, eating turkey dinner in the Tavern on the Green in Central Park, surrounded by Jewish families celebrating the birthday of one whose divinity they do not recognise.

Michelle, who went on to run a dissident radio station in Port-au-Prince, Radio Haiti-Inter, with her husband, Jean-Léopold Dominique, until he was shot dead one morning outside the studios. No one has ever been brought to book for the murder. That, tragically, is Haiti.

Indeed Latin America predominates in the pictorial line-up. Magali, from San Juan, Puerto Rico. Giselle, from Montevideo, Uruguay. But Miguel, from Santiago, Chile? Where is Miguel?

The face was . . . memorable. Sallow of skin, a wide jawline, a brow that beetled like a leftover from Mount Rushmore. Normally with a solemn expression, for Miguel took life seriously. But when a rare smile broke though that facade it was all the sweeter for its unexpectedness.

The class still have a Topica email site and keep in touch with each other. But being an internet slow learner I didn’t cotton on to it until it had been going for some time. As I surfed back through the pages I discovered that Miguel had died, not just prematurely, but heart-breakingly. He had succumbed to Guillain-Barré Syndrome, a rare neurological condition.

One posting said he had suffered a brain tumour, a heart attack, kidney failure and pinched nerves in his spine. He was living alone in his apartment in Washington, confined to a wheelchair, no longer able to earn an income.

Miguel had worked for the Organisation of American States in DC which, not being a federal agency, had no legal obligations to its employees in terms of long-term sickness benefit. It had cost him a good deal of soul-searching, but eventually he had steeled himself to turn to his old classmates for financial help in paying his medical bills.

Many ex-classmates did come to his aid. But as I read his emails and theirs, I was overcome by regret, and still occasionally am. For, had I known at the time, I could so easily have made my contribution to helping Miguel out and would have dearly wanted to. It might not have saved his life in the long run, but it could have done something to ease his situation during those last months.

I look at the dog-eared picture, and from long ago a tiny gleam of light emerges from deep in my memory. Miguel isn’t present in the photograph for one simple reason. It was he who took it, on that day in Larchmont. I don’t think I’ll digitise it. Somehow its physical existence is more important.

1 Taoiseach has confirmed schools will reopen at the end of August
2 We need to pay very close attention to what is happening in Britain now
3 The strain is starting to tell on Brendan O’Connor
4 Michael Smurfit: ‘I asked Trump to invite me to the White House for my 80th birthday’
5 Derek Chauvin charged with murder in connection with death of George Floyd
Real news has value SUBSCRIBE