An Irishman’s Diary: Butte, Montana the most Irish town in America 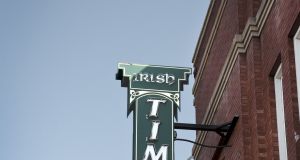 Irish Times pub sign in Butte, Montana, the most Irish town in America.

On the eve of St Patrick’s Day, an email arrived from a long-lost relative in Butte, Montana, announcing that, after putting it off for decades, she would finally visit Ireland later this year. It was great news, in one way. In another way, it was alarming.

It must be 15 years since we found Rosie; or rather, since she found us. And not long after the first exchange of letters, I travelled out to the Rocky Mountains to visit her and other hitherto unknown cousins, and to see the fascinating former mining town itself.

I was immediately struck by Rosie’s deep attachment to the country of her foremothers. Like all my US relatives, she is descended from sisters of my namesake grandfather (who also spent years in Butte, but didn’t leave any offspring behind – that we know of – before coming home).

Even by the standards of a famously Irish town, she was fiercely proud of her roots. While entertaining us to dinner, for example, she had a Lunasa CD playing in the background.

Less subtly, her place was filled with mementos of Ireland, bought in the local, oddly-named Cavanaugh’s County Celtic shop, in which she should have had shares.

Even then, I worried that, if she ever got around to visiting the actual Ireland, it might prove a disappointment. But in the event, a year or two later, it was her sister – not so emotionally invested, we thought – who came instead, with a daughter.  That was like a test drive, literally. After some Dublin hospitality, we let them loose in a rental car and pointed them towards Connemara. When they got back, I learned that negotiating Ireland’s more picturesque roads in a stick-shift vehicle, with the steering wheel on the wrong side, while the natives drove like “crazy people”, had not been without trauma.

But I sensed too that Ireland, then at the height of the Tiger mania, had been generally a bit more stressful than expected.

So when a decade passed with no word of a visit from Rosie, I thought that perhaps she had decided to preserve her romantic image of the motherland by avoiding the real thing, which seemed sensible.

Now I realise that, like many Americans, she was just waiting for retirement before making the big trip.

The good news is she’s not coming until mid-September, which is when the Irish summer usually happens. With any luck, we’ll be having it the same week.

In the meantime, I have six months to tidy the country up a bit.

So while other cities may have an “Irish Quarter” – including Birmingham – the phrase is nowhere nearly as meaningful as in Butte.

It was also a notoriously radical place once, noted for both its green and red politics. And by coincidence, earlier this month, the former was the subject of a fascinating show in Cavan, under the curious title The Pram that Helped the Rising.

Performed by artist Amanda Jane Graham, with musical accompaniment, it told the story of her own family background in Butte, in particular how a doll’s pram was once used to smuggle miners’ cash back to Ireland in support of the rebellion.

A sum of $3,600 was first collected in the family bar, then converted into large bills, and finally – talk about money laundering – ironed for maximum space efficiency. After that, it was stuffed into the mattress, quilt, and pillow of the pram, and pushed through US customs by a three-year-old revolutionary, Amanda’s grandmother (one of the Wicklow Timmins clan, of subsequent political fame).

The show, in which the actual pram featured, won a standing ovation in Cavan, which has especially strong links to Butte thanks to the mining magnate Marcus Daly.  It was a once-off, free event, and there are no immediate plans to tour.

And if it’s playing anywhere in mid-September, put me down for two tickets.