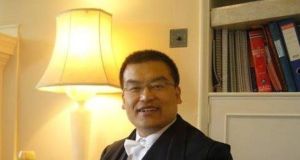 Tao Guo: picked up ‘The Third Policeman’ and couldn’t put it down. Now, sure enough, he’s turning it into Mandarin.

One of the most interesting people I met at last week’s Flann O’Brien conference was Tao Guo, a Chinese scholar and translator, currently living in Denmark. When I say he’s “Chinese”, that would be the conventional estimation, since he was born in China, of Chinese parentage.

But in the surreal world of Flann O’Brien, there can be considerations other than nationality in a man’s make-up. And indeed, by his own admission, Tao Guo is not fully, or even predominantly, Chinese any more. On the contrary, he admits, he is now about “75 per cent bicycle”.

This may be less of an exaggeration in his case than with other Flann-reading cyclists. Back in car-mad, smoggy China, he was a zealot for two-wheeled transport. His Facebook account has a video of him biking around his home city of Zhuhai, with a big red flag stuck to the handlebars bearing the message “I love clean air”.

It was his fondness for clean air and bicycles that brought him to Denmark. But it also set him on another, more mysterious journey – to explore the small but fascinating genre of the European cycling novel. This started, conventionally enough, with HG Wells who, before he became known for science fiction, wrote a comic novel called The Wheels of Chance (1896), inspired by the cycling craze of that era.

The rapid spread of bicycles was then threatening to revolutionise Britain, allowing poorer people and women a freedom to travel they had never previously enjoyed. So along with being a work of humour, Wells’s book was a semi-serious reflection on the way bikes were challenging the class system and the relationship between the sexes.

And he too must have been an enthusiast for the two-wheel cause, to judge by Tao Guo’s favourite Wells quotation: “Every time I see an adult on a bicycle, I do not despair for the future of the human race.”

But having translated The Wheels of Chance into Chinese, Tao Guo embarked on altogether stranger territory when he decided to do the same for Flann O’Brien’s absurdist masterpiece, The Third Policeman.

This too is a bicycle novel, after a fashion, except that the cycling involved is of an entirely mental (in both Irish senses of the word) kind.

Apart from the narrator, who has no idea what’s going on, the main protagonists are policemen whose work revolves around finding stolen bicycles that they themselves have hidden to forestall the effects of molecular interchange, which is already wreaking havoc in the parish, especially on the postman. And that’s only the most realistic part of the plot.

Even so, Tao Guo picked up the novel and couldn’t put it down. Now, sure enough, he’s turning it into Mandarin. And among the questions he was seeking answers for at the conference in Prague was a way to translate the concept of “Omnium” (defined by second-policeman MacCruiskeen as “the essential inherent interior essence which is hidden inside the root of the kernel”).

He has now solved that problem, he told me. And as he wrestles with the book’s many Hiberno-English (or O’Brieno-English) phrases – including “banjaxed”, “be the hokey”, “gawm”, “a schooner of Coleraine Blackjack” and “that takes me to the fair” – we can only wish him well.

Another of his favourite quotations is from De Selby, The Third Policeman’s mad scientist/philosopher, to the effect that “a journey is an hallucination”. That’s certainly true of the unnamed narrator’s journey. But Tao Guo’s trip from Zhuhai to the world of Flann O’Brien studies must have a mind-bending quality too.

Another of De Selby’s almost-plausible reflections, on the subject of good and bad roads, may be worth recalling here: “A good road will have character and a certain air of destiny, an indefinable estimation that it is going somewhere, be it east or west, and not coming back from there. If you go with such a road [...], it will give you pleasant travelling, fine sights at every corner and a gentle ease of peregrination that will persuade you that you are walking forever on falling ground. But if you go east on a road that is on its way west, you will marvel at the unfailing bleakness of every prospect and the great number of sore-footed inclines that confront you to make you tired.”

I hope Tao Guo and his current road are travelling in the same direction. In any case, it’s probably too late to give him the classic Irish advice to a lost traveller – “I wouldn’t start from here if I were you.”