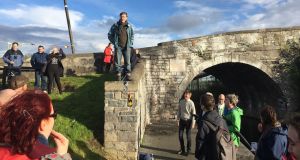 Prof Anthony O’Farrell addressing the walkers at Broome Bridge, with the plaque marking William Rowan Hamilton’s discovery of quaternions behind.

It is still sometimes remarked that William Rowan Hamilton, the Irish genius whose calculations helped put spacecraft on the Moon and Mars, is one of the “unsung” heroes of physics.

In fact, I heard that said of him as recently as yesterday. But this was ironic, because the speaker was Tim Blais, a Canadian who combines his love of both physics and music in a humorously educational YouTube channel called “A Capella Science”. And Blais was commenting on a recent broadcast, as a result of which the Dublin-born discoverer of quaternions is now officially sung.

Part of the credit goes to another Hamilton, US founding father Alexander, whose life is currently the subject of a hit Broadway musical. This has opened an unexpected niche for parodies involving people called “Hamilton”; especially if – like William Rowan – their names have the same number of syllables as Alexander. (In a different field, an operetta on the life of George “Danger Here!” Hamilton is surely now inevitable).

The YouTube song is somewhere between hip-hop and opera – hip-hop-era, maybe – and is performed by a chorus of Blais’s fellow nerds. It probably won’t win Grammys. But it’s a pithy introduction to the subject, has attracted 64,000 views, and is helping spread the fame of a great Dubliner across the Atlantic.

Back in his native land, meanwhile, Hamilton is fairly well celebrated. There have been stamps and statues, places named after him, the inevitable plaques, and many books. “Hamiltonian” is a much-used adjective in universities. And of course there is the annual walk, every October 16th, celebrating his Eureka moment at the place it happened.

I was part of the latest walk, last Sunday, starting in Dunsink Observatory, where he lived and worked, and following his steps as he strolled with his wife on that October day in 1843. It is, as event organiser, Fiacre Ó Cairbre, mentioned, one of the best-preserved locales of any famous science moment.

Now as then, the observatory occupies elevated farmland overlooking Dublin. I know it’s farmland, because one of the first things I did on the cross-country section of the walk was step in a fresh cow pat, left by the herd of Charolais nearby.

But back on asphalt, we crossed a bridge of the Tolka, as the Hamiltons did, and then strolled along the Royal Canal, as they did too – he deep in thought, she talking occasionally. At some point we also passed the spot where, as he recalled years later, “an electric circuit seemed to close” in his brain, “and a spark flashed forward”.

Then we reached the same Broome Bridge, at Cabra, where he scratched the breakthrough formula (“one small scratch for man”, Ó Cairbe calls it) that allowed for four-dimensional calculations and lit the way to Einstein’s space-time continuum.

The graffiti has long ago vanished. But it has since been rescratched in other places, including Kilmainham Gaol, by a prisoner named Éamon de Valera. And among the commemorations at Cabra now every year, one of the younger maths students present is invited to repeat Hamilton’s minor act of vandalism.

The walk was started in 1990 by Prof Anthony O’Farrell, who still gives a short talk at the bridge. It has over the years attracted several Nobel Prize-winners, including the physicist Murray Gell-Mann (who borrowed the name “quark” from another well-known Dubliner).

I’m told that, in 26 years, the event has always enjoyed good weather, suggesting Hamilton has influence in spheres other the mathematical. For this and other reasons, it strikes me that his home city should exploit his fame even more than it does.

His genius aside, his was an attractively human hero. He also wrote poetry, drank too much, and when he fell in love, fell hard. On another walk years earlier, apparently, heart-broken at the loss of his first love to arranged marriage, he considered jumping into the Tolka.

His life might have ended in a bad Joycean pun (“Dunsink”). But luckily, he was saved by a sense of unfinished business: “I felt that I had something to do.” So he eventually featured in Finnegans Wake anyway, along with quarks, for happier reasons.

It’s good that he’s being sung about, belatedly. But as his annual commemoration ushers in another Irish Maths Week, it is still probably not enough appreciated that, in de Valera’s words, Ireland is “the country of Hamilton, a country of great mathematicians”. Maybe, as well as singing, we should shout about him a bit more too.