Alex Kane: O’Neill should have looked before she leapt on school closures 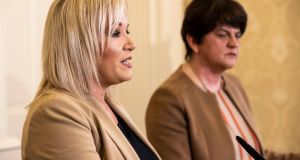 First Minster Arlene Foster (right) and Deputy First Minister Michelle O’Neill before a joint press conference at Stormont Castle in Belfast to give an update on plans to tackle Coronavirus and announce scool closures on Friday. PA Photo.

There was a welcome and rare moment of hope in Northern Ireland on January 11 when , after three years of suspension, the Assembly and Executive were rebooted because the five main parties agreed to govern together again. We don’t often have moments of hope here, so it was a very good beginning to the new year.

And while there was evidence that some of the old tensions were emerging, particularly between the DUP and Sinn Fein, things were still looking good on Thursday, March 12, when the Executive gathered for a press conference in the afternoon and spoke with one voice and from the same script. Even the cynics--of whom I am one--dared to believe that the political representatives of unionism and republicanism could and would rise to the unprecedented challenges presented by Covid-19; a virus which doesn’t recognise borders or national identities and which will fell a Protestant as quickly as a Catholic.

Yet by 11am the following morning Sinn Fein’s Michelle O’Neill, deputy first minister, addressed a separate press conference in the Great Hall at Stormont and made clear she was no longer on the same page, let alone using the same script, as Arlene Foster and Health Minister Robin Swann (former leader of the Ulster Unionist Party). Apparently Sinn Fein was angered by a press conference--held shortly after the Executive’s conference on Thursday--at which Boris Johnson seemed to be suggesting that a strategy, described by some critics and officials within the World Health Organisation as the ‘herd approach,’ was going to be UK government policy. And that was something which Sinn Fein, in this part of the UK, could not be seen stand over.

For Sinn Fein this is one of the awkward consequences which arise from being key political players in two separate jurisdictions, particularly when the governments of both jurisdictions are pursuing very different approaches to the same crisis. In other words how, with any credibility, could Michelle O’Neill endorse a policy in Northern Ireland which was, in some key aspects, the complete opposite of the policy being endorsed by Mary Lou McDonald in the Republic?

It would have helped if, before her solo-run on Friday morning, O’Neill had spoken to Foster and Swann, if only to gauge their personal response to the ‘herd’ approach. For instance, speaking in the Assembly during ministerial question time on Monday, Swann said, “Herd immunity is not a tool I will be utilising as a way to combat this virus.” Had she spoken to him on Friday morning--just hours after she had agreed Executive policy on tackling the virus--she might have discovered he shared her concerns.

That approach might also have allowed the Executive to be still on the same page at Saturday’s North-South Ministerial Council. It would definitely have prevented the dangerous drift into ‘dreary steeples’ territory, in which even a pandemic could become an Orange/Green issue. Most important of all, though, at a moment when everyone--and I really do mean everyone--is unsettled and probably even downright scared ( meaning it is vital there is clear, coherent, collective leadership from the centre of government) we had a few days in which people had to hear the same-old, same-old squabbles on radio and television.

Shortly after O’Neill’s statement on Friday the RHI Report was published. Arlene Foster was criticised, but not damagingly enough for her to resign (which would have kick-started a new political crisis). Worryingly, the severest criticism was levelled at the Civil Service within the department at the centre of the inquiry; which raised the question of whether this was a problem restricted to a ‘rogue’ department, or if, as seemed quite likely, the practices, flaws and errors identified for criticism were common features of the civil service administration in every other department, too?

If so, that could mean serious problems in terms of how the Executive and administration cope with the present crisis. Put bluntly, Northern Ireland needs a united Executive pursuing an agreed strategy (even if there may be individual concerns raised behind closed doors); but it also means having the assurance that the administration, from the most junior levels right through to the top officials in every department, is capable of implementing every aspect of agreed policy. I’m not sure we have that assurance.

Northern Ireland is in a difficult place right now. Some politicians will want to take a lead from what is happening in the Republic, while others look to the UK--which is obviously where the funding comes from. These are going to be tough months for the Executive. There cannot be an internal battle over from whom they take their steer. They are in this together or not at all. I welcome the news that Foster and O’Neill will front daily press conferences; so is it too much to hope that maybe, just maybe, they can prove themselves capable of putting NI and its people--irrespective of how those people define their citizenship--above and beyond all else? There are lessons to be learned from developments in both jurisdictions and both Sinn Fein and the DUP (along with Boris Johnson) need to share and learn from each other.

Irish, British, English, Scottish, Welsh, Ulster, Northern Irish et al. None of that really matters quite as much today as it did three months ago. We are in the same boat, facing the same perils from the same storm. And, as Haruki Murakami wrote (Kafka on the Shore) “...once the storm is over you won’t remember how you made it through, how you managed to survive. You won’t even be sure, in fact, whether the storm is really over. But one thing is certain. When you come out of the storm you won’t be the same person who walked in. That’s what this storm’s all about.”