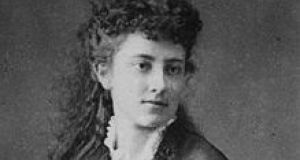 Olive Schreiner: one of South Africa’s earliest major literary figures, she was a feminist, pacifist and anti-racist

The Story of an African Farm was one of the first great South African “colonial” novels and its author, Olive Schreiner, who died 100 years ago on December 11th, was one of its earliest major literary figures. She was a feminist, pacifist and anti-racist and held liberal, progressive views on many issues.

Schreiner was born in 1855, the ninth of 12 children of a German-English Wesleyan missionary couple in what was then Cape Colony. Her childhood was unsettled and harsh, largely because of her father’s impracticality and poor management. She was mainly self-educated and was highly intelligent, aspiring to be either a doctor or nurse, but her limited circumstances and poor health (she suffered from asthma) prevented her pursuing either career. Instead she worked chiefly as a governess and turned to writing as a potential livelihood but also to stave off depression, to which she was prone.

She managed to save enough to travel to England in 1881, taking with her the manuscript of a novel she had written, which was published in 1883 as The Story of an African Farm. The novel features three characters, first as children and then as adults, who live on an ostrich farm in the veld, and is largely autobiographical, reflecting Schreiner’s own philosophical outlook. She rejected her parents’ Christian beliefs and fought against the widespread view that women were dependent on men. The novel’s stance on marriage, premarital sex and extra-marital pregnancy was way ahead of that prevailing at the time.

It sold widely in Europe and the US, and feminists welcomed the strong heroine who asserted her own independence. Schreiner published the book under the pseudonym Ralph Iron and when she revealed her true identity on republication in 1891, it caused a sensation and no little outrage, but London’s intelligentsia rallied around her. She became especially friendly with Havelock Ellis, who shared her outlook on sexuality, sexual equality, women’s rights and contraception.

When she returned to South Africa she became more openly involved in political campaigning and wrote non-fiction works as well as another novel, Trooper Peter Halkett of Mashonaland (1897), which was critical of British imperialism in southern Africa and especially of Cecil Rhodes and the white settlers of Rhodesia. Her political activities brought her into contact with Samuel Cronwright, a politically active farmer, whom she married in 1894. Their first child, a daughter, lived less than a day and her other pregnancies all ended in miscarriage. The marriage suffered strains and the couple were frequently apart. Her writing consoled her but ill-health and depression continued to dog her.

She tried to prevent war breaking out between the British and the Boers and her The South African Question by an English South African made an appeal to the British public, but in vain. During the Boer War (1899-1902), she supported the Afrikaner cause but was not in favour of war, preferring a non-violent, pacifist approach. Her house was burnt by the British and she suffered something akin to internment in what was virtually a concentration camp.

Continuing to campaign for equality for women, she became increasingly interested in socialism and in more rights for native Africans. Her 1909 book, Closer Union, showed she was one of the earliest people to anticipate the exclusion of black people from political power in what would become the Union of South Africa, the dominion set up by the British in 1910. Having been vice-president of the Women’s Enfranchisement League, she withdrew when she discovered that some of its branches intended to exclude black women.

In 1911, she published Women and Labour, on which she had been working for many years; it was to influence women’s rights campaigners for many decades. Social conditions, she wrote, robbed women of “all forms of active, conscious social labour . . . reducing them, like the field tick, to the passive exercise of their sex functions alone”.

She looked forward to the time when women would participate in public life on an equal footing with men, when, she predicted, war would be used less as a means of settling differences. She thought women “understand what unites the races better than men because of their common experience of mothering”. Equal pay for women was also strongly advocated.

A third novel, From Man to Man, was published posthumously in 1926 and was said to be her favourite among her novels. Beginning with a consideration of the confined domestic lives of White women in South Africa and Britain, it widens its perspective to include black women and girls, which strengthens the central character’s resolve to educate herself and her children against the prevailing racism and sexism of the contemporary society.