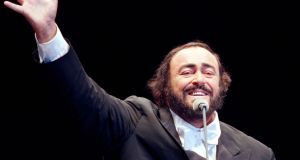 We all know Luciano Pavarotti was one of the world’s greatest tenors. We know he brought opera to the masses through his memorable Nessun Dorma at the soccer World Cup. And of course we know the unfortunate man had an enormous weight problem. In fact, he performed his last concerts sitting on a chair. A sad ending to such a stellar career, in which he brought so much happiness to so many people.

However, what you probably did not know about the great man was that his big hobby was horses. Yes, horses. He loved horses, especially Irish horses. He believed the best horses were bred in this country.

Can you imagine Big Pav on a horse? Okay, neither can I. Not a pretty sight, I presume. Admittedly, it was in his earlier days before the weight got out of control and he became the target of the cartoonists. Some of the stuff was quite cruel and not very edifying. But such is the price of fame. Boy, did the tabloids have a go at him, big time? It was relentless.

The first time he was on a horse was in England, where he was performing La Bohème in Covent Garden. “It was a rough experience and I thought I would not sit down for a week after it,” he explained ruefully. After the ride he thought he would get back to the hotel and have a long hot bath to ease the pain.

But, no such luck. He was told another great tenor Di Stefano had cancelled an appearance on the big television show Sunday Night at the Palladium and he was to appear instead. “I said I could not possibly appear. My behind was too sore and I was too tired,” he moaned. His advisers informed him that this was the most important show in England and it would be a huge boost for a young tenor’s career. He went on the programme and remarked later:”I never sang better.”

He was convinced Ireland produced the best horses in the world and when he was singing here in 1979 he asked to be shown some horses he could buy. “I said I wanted to see the strongest horse in Ireland and was taken to see a 14-year-old named Shaughran who had been one of the best hunters in the country. He was also huge, which may have been why I took him right away. Because of his great size, I felt my weight would be no great problem for him. It wasn’t. He turned out to be gentle and well bred.”

On the same day he also bought a four-year-old gelding named Herbie who was an excellent jumper. He thought having horses to ride would be a wonderful thing for his whole family, but particularly for his teenage daughters. He felt his daughters were not getting enough exercise and what better exercise than riding an Irish horse?

The only problem was that the girls did not know how to ride and were not exactly enamoured by the thought of mounting an enormous horse for a bit of exercise, just because their mad father had another one of his brain storms. However, the maestro persuaded them of the joys of the sport and they bought into his plan.

Again, Ireland saved the day for the big Italian. He had heard of a famous riding school outside Dublin, the Iris Kellett Riding School, and he decided to send the girls there. It was a highly successful decision and it worked out perfectly for him and the girls. He said: “Now my daughters love riding, they love horses. I was told they even got up at 7am mucking-out of the stables with a certain cheerfulness.”

Iris Kellett was of course Ireland’s most famous woman show jumper before she became the country’s most distinguished trainer. She was one of the world’s top professional riders. She first operated her school from Mespil Road in Dublin before moving down to Kill, Co Kildare. Her knowledge was keenly sought by riders, teachers and administrators in equestrian sports worldwide. She was inducted into the Texaco Sports Hall of fame in 1997.

She judged, lectured and demonstrated her skills in many countries, where her expertise in horse breeding, training and competition had become legendary. She had a major influence on many prominent Irish riders, including Eddie Macken and Paul Darragh. She died in 2011, aged 85.

Pavarotti toured America in 1980 and rode in Dallas and Boston . He joked after the tour, “if the horse is willing to take me, I am eager to ride. Someone asked me if I remembered the name of the horse I had ridden in Boston? No, I replied, but I’m sure the horse remembers my name.”

He was a man of many parts: a great tenor, a wonderful personality, always generous with his time and money, and a lovely gentle sense of humour. Yes, I was a big fan. Many the quiet evening I have sat in my armchair and listened to that incredible voice waft around the room. Simply sublime.