A lot less to Operation Thor than meets the eye

Electronic tagging seems to have been a ministerial afterthought 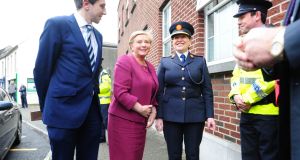 Under pressure as a storm whips up around rural crime ahead of the general election, Minister for Justice Frances Fitzgerald has done her best to look busy in recent months.

The public relations effort has become an onslaught. But scratch at the surface and there is a lot less to her plans than meets the eye.

Operation Thor, announced with great fanfare on Monday, represents the latest effort to push the narrative that the Fine Gael-Labour coalition is “cracking down” on crime.

If ever there was a textbook example of policing by press release and spin, Operation Thor is it.

Some €5 million has been earmarked to fund the operation.

It will, among other things, pay for the overtime that will be so vital to surveillance of the dangerous criminals targeted and to intervening when crimes are under way, not to mention running labour-intensive investigations in the vital period just after crimes are committed.

Well, at least we assume that’s what the money will be used for. No detail has been given. There was no timeline over which the money would be spent. And even the sum was not clearly stated: “in excess of €5 million”, was the best Fitzgerald could do.

The Department of Justice subsequently told The Irish Times the funding would run for “about six months”.

Divided between the 28 Garda divisions across the State over six months, just under €27,800 will be available to each division each month under a budget of €5 million. It doesn’t sound like much when you break it down, especially for such a major simultaneous “crackdown” on both rural and organised crime.

When one considers spending on overtime in the Dublin area can reach €2 million per month, Operation Thor’s new contribution is put in perspective.

And the monthly spend per division will be lower if some money is diverted away from overtime and into areas such as, for example, the advertising of the promised nationwide crime prevention campaign.

Outlining her plans early on Monday morning in a document sent to the media, Fitzgerald said Operation Thor was proof of the Government’s increased investment in policing.

Efforts, as yet unspecified, would be made to “disrupt” the stolen goods market. And “programmes” – again, unspecified – would “reduce reoffending by prolific” criminals.

The fact that Garda Commissioner Nóirín O’Sullivan was used again as an electioneering prop for Fine Gael was perhaps the lowest point of the day.

She, along with colleague Deputy Commissioner John Twomey were on Monday left with no option but to go out in the media and unveil a radical new assault on policing that is in reality – and at very (very) best – a modest bump in overtime and a few new cars to prop up the current depleted fleet of spluttering bangers.

The promised increase in Garda objections to bail for prolific burglars was greeted with bemusement by members of the force objecting to bail daily in the courts.

They are roundly, and rightly, ignored by judges with no option but to grant bail. The judiciary does so in the knowledge the suspects’ trials may take years to come to court.

They know too that the already-full prison system would need to release a convicted criminal early to make way for someone who might be guilty if bail were declined.

Fitzgerald’s promise of “tougher” sentencing for burglars is fantasy considering the independence and discretion of the judiciary is sacrosanct.

Despite throwing the kitchen sink into the Operation Thor announcement, the Minister made no mention of electronic tagging for burglary suspects on bail. But, come the tea time news bulletins, it was a central plank of the new policy, with Fitzgerald announcing she was legislating for it.

Why she neglected to mention such a bold move in the initial Operation Thor announcement was anybody’s guess.

Between Thor’s early-morning unveiling and the Minister’s late conversion to electronic tagging, Save Our Community – the organisation leading the charge in demanding more Garda resources for rural Ireland – had been on every major Irish radio news show highlighting the absence of tagging from the plan.

One wonders if that criticism and the airtime it captured influenced the Minister’s thinking.

Her on-the-run parachuting of such a radical idea as electronic tagging into the pot had the whiff of an errant spouse sprinting between late-night garage forecourts looking for a bunch of flowers – any bunch of flowers – to rescue an already-failed marriage. Conor Lally is The Irish Times Security and Crime Editor