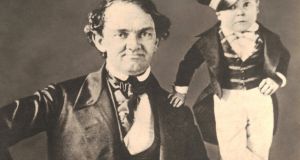 PT Barnum and Tom Thumb, who was by far the most successful touring celebrity on earth

On New Year’s Eve, my sister-in-law and I forced our extended family to sit through a hastily composed skit about the time when the impresario PT Barnum and his diminutive protégé General Tom Thumb were presented to Queen Victoria in 1845.

Our children formed the cast; the audience numbered five.

Which is precisely one more than were in the cinema in Carlow last week when I took my daughters to see The Greatest Showman, the new musical starring Hugh Jackman as Phineas Taylor Barnum.

It’s a bouncy extravaganza and I enjoyed it; the girls gave it nine out of ten.

As a historian, I’ve long accepted that showbiz and the truth are itchy bedfellows and I conceded early on that this wasn’t the right film to consider, say, Barnum’s beastliness to poor old Jumbo the elephant.

And I guess it’s okay to make Tom Thumb a grown man when they first meet, rather than the seven-year-old boy he was in real life.

Theirs was a rather beautiful friendship.

They both hailed from Connecticut where PT had spent some time behind bars over an illegal lottery venture. He reinvented himself as a showman, introducing a 161-year-old slave who had nursed baby George Washington and an equally spurious “Feejee mermaid”, concocted by stitching the head and torso of an orang-utan onto the body of a hefty salmon.

And then he got wind that one of his cousins in Bridgeport, Connecticut, was mother to a perfectly proportioned, two-foot tall son named Charles Sherwood Stratton.

PT swiftly took young Charles under his wing and renamed him “General Tom Thumb”, after the tiny boy who is swallowed by a cow and fetches up at King Arthur’s court in the folk tale.

Tom was paid healthily and elegantly attired by Barnum. He mastered piano and violin, sang well and proved a convincing actor, capable of holding the audience’s attention for a full-length play.

However, it was his charisma that made him a smash. His comic timing was flawless; his performances brought the house down time and again.

In 1844 Barnum took his prize act to Europe. London’s critics initially panned the “little monster” but their break came when the duo were bidden to meet Victoria at Buckingham Palace. After a shaky start, the queen’s spaniel saved the day by barking at Tom; the boy whipped out his ceremonial sword and began fencing the dog. So amused was Victoria that she invited them back twice more.

The royal blessing provided Barnum with precisely the kudos he needed and by the time they sailed for home 2½ years later, Tom had performed to over five million people, including the tsar of Russia and the king of the French.

He was by far the most successful touring celebrity on earth, leaving Charles Dickens and Jenny Lind for dust.

They voyaged home on the Cunard liner Cambria, sailing out from Liverpool on February 12th, 1847.

As the ship chugged past the Metal Man of Tramore, an American passenger approached Tom seeking funds for “the sufferings of the poor in Ireland”. Tom, who had already contributed £100 to famine relief, chipped in another $50.

During the voyage, Tom befriended John Palliser, a Dubliner on a mission to track down the “aboriginal people” of North America. His first sighting of Tom was when the latter unexpectedly popped out of a pile of shawls in the Cunard saloon, saying: “Waiter, bwing me a Welsh wabbit!”

The two were soon sharing cheese toasties and porter, although Palliser lamented Tom’s penchant for vice. “The little wretch was an inveterate gambler, and up to all the mysteries of whist, hewker poker, and bragg.”

The ship had barely docked in New York before Tom was back at work, earning $1,000 a day and securing Barnum’s position as America’s foremost showman.

Much to his enemies’ delight, Barnum went bankrupt in 1856. Tom bailed him out by going on another European tour and the good times returned. Barnum repaid him by introducing him to little Lavinia Warren; Abraham Lincoln hosted their wedding reception at the White House and Tiffany laid on a silver coach for the occasion.

They later settled on one of the appropriately named Thimble Islands in Long Island Sound, New York.

Tom had been boozing and smoking since his boyhood. He also put on a lot of weight. He died aged 45 in 1888 and was buried in Bridgeport.

Two years later, Barnum made his final visit to England. He gave a talk in London and donated the proceeds to help distressed women in the west of Ireland.

When he died aged 80 in 1891, he was laid to rest near his invaluable little cousin.