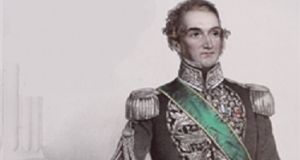 John Thomond O’Brien: known as Don Juan O’Brien, he was an honoured veteran of the South American wars of independence

The Isla del Sol, or Island of the Sun, on Lake Titicaca is one of the most important sites in Inca mythology.

It lies almost 4,000 metres above sea level in the Andes, on the border between Bolivia and Peru.

It was here that the god Viracocha arose from the waters and created the first two Incas, Manco Capac and Mama Ocllo.

In 1825, John Thomond O’Brien, an Irish cavalry officer from Baltinglass in Co Wicklow, visited the Isla del Sol with Simón Bolívar, the Venezuelan general and renowned Liberator of South America.

O’Brien was an honoured veteran of the South American wars of independence, having spent eight years fighting against the Spanish in Uruguay, Chile and Peru, and was accompanying Bolívar on a triumphant tour through the continent’s Andean heartlands.

The Irishman had served as an aide-de-camp to José de San Martín, the other great South American revolutionary leader, during the two most important battles in Chile’s war of independence, and, in 1821, had stood on the platform during the declaration of Peruvian independence in Lima’s main square.

However, four years later, with Bolívar watching on, O’Brien buried his medals in the ruins of the ancient temple on the Isla del Sol, perhaps to symbolise that his life as a soldier was over and to ask for the blessing of the ancient gods for his future commercial ventures.

O’Brien’s connection with South America, which had begun in 1811 when he had emigrated from Co Wicklow to Buenos Aires, was to continue until his death in 1861, as did his links to Lake Titicaca.

Not long after his visit to the Isla del Sol with Bolívar, O’Brien returned to the shores of the lake to take ownership of a silver mine, close to the Peruvian town of Puno.

Many of Peru’s legendary silver mines had been abandoned during the wars of independence and were in substantial need of investment. O’Brien and his partner, John Begg, a Scottish merchant based in Lima, drained the mine, ordering a specially constructed engine from England for the purpose.

However, they had another problem. They were in need of wood and foodstuffs – to rebuild the mine and feed the miners – both of which lay on the eastern side of Lake Titicaca.

The light balsas or rafts which the indigenous people had used as the transport on the lake for centuries were not suitable for transporting raw materials in the quantities needed.

O’Brien hit upon an idea; he and his partners bought a broken-down brig called the Santa Maria in Lima and had the 81 tonne ship dismantled, and the hull, sails, rigging, cables and ironwork transported across the Andes by mules.

A team of shipwrights were employed to rebuild the vessel, which was renamed the Julia, at a purpose-built shipyard on the shores of Lake Titicaca. The Julia plied the lake for many years, becoming the highest operating sailing ship in the world and earning O’Brien fame in both South America and Europe.

In later years, O’Brien raised the possibility to British investors of launching a steamship on Lake Titicaca, echoing the plot of Werner Herzog’s 1982 movie Fitzcarraldo in which an Irish-Peruvian rubber baron (based on the real-life Carlos Fitzcarrald) attempts to drag a steamboat through the Amazon jungle.

O’Brien kept a house in Puno but found the Andean climate deleterious to his health, instead spending much of his time in Buenos Aires, Lima and Santiago de Chile during a tumultuous postwar career.

In the 1820s, O’Brien promoted Irish emigration to Argentina and raised subscriptions in Buenos Aires in support of O’Connell and Catholic emancipation; in the 1830s he explored the Amazon for gold and was imprisoned in Buenos Aires by the dictator Rosas; in the 1840s he found himself mixed up in the Uruguayan civil war; in the 1850s he was building public monuments to South America’s revolutionary heroes.

He was also a frequent visitor home to Ireland and Britain, where he was celebrated as a war hero and an authority on all matters South American, and would donate to museums the specimens of wildlife and minerals which he had collected during his wanderings across the continent.

But it was in Santiago de Chile and Lima that he felt most at home in the last years of his life, recalling the idle days spent pottering about the waters of Lake Titicaca, reading Thomas Moore and Byron, fishing and taking potshots at the birds resting in the rushes, and sketching the ancient ruins of the Isla del Sol.