One country, one artwork: how do you capture an entire nation?

In the cold corridors of the Council of the European Union, a blimp is flying the flag for Irish art, but can this idea take off? 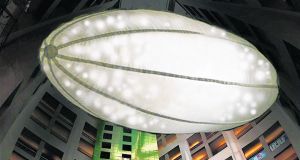 It would be difficult to think of a building more hostile to art. The Justus Lipsius is the headquarters of the Council of the European Union and, as art and culture are regularly co-opted into transmitting ideas about a country, it is the unfortunate task of each member state, as they take on the council presidency, to come up with some way of making a visual mark.

Apart from the problems of deciding how to sum up Ireland in an artwork, this is a tough job, as the list of things you cannot do (attach things to walls, block sightlines, obstruct the floor space, include sound) is almost as enormous as the Justus Lipsius’ atrium itself. Going to see how Ireland has fared, halfway through our presidency period, brought me to Andrew Kearney’s Skylum .

Described as embodying “the innovative and developed technology of contemporary Ireland [ Skylum ] examines how elements of theatricality, performance and nature are brought together within the built environment”. It doesn’t necessarily achieve all that, but what it does do is demonstrate the near-impossibility of creating a sense of individual identity within a corporate monolith.

Contemporary ideas of Ireland were obviously uppermost in the minds of the commissioners, as across the atrium, as well as the logos and literature for the presidency, the Kelly green most associated with Ireland is absent. Here, Éire Ireland is written in lime green and blue, implying that this is a different Ireland, a new Ireland, an Ireland that might surprise you. And yet, as I linger uncomfortably in the lobby, I find myself yearning for a shamrock somewhere, not in a reactionary way, but because, when looking forward, it can be helpful to include a sense of the familiar.

Kearney and his team have managed to get around the no-sound stipulation, as I’m hearing noises, some music, and the occasional tolling of a bell. Skylum , a 15 metre zeppelin-shaped construction, suspended from the glassed-in roof, emits sound in reaction to the movements of people below. The installation also blinks with light, but because the building is mainly occupied in daylight hours, much of that drama is invisible.

Ireland isn’t the only country to have made that mistake, and a look through previous installations shows that similar problems have beset all the presentations designed to give a sense of national identity within a Europe in which boundaries are steadily being eroded. In 2010, Spain chose Daniel Canogar’s Travesías , an undulating screen of LED lights. In the artist’s words it was “reminding the users and visitors of the building of the obstacles, uncertainties and effort required to advance in times of transition, and the satisfaction of discovering new paths”, which is an awful lot to ask of a light installation on a sunny day.

Eurovisions of art
Germany built bridges in 2007, while the Hungarians put down a carpet rolling out icons of that country’s cultural history. The Slovenians included a huge photograph of their Lipizzaners (there is dissent between Slovenia and Austria about the true home of these white horses), and the Belgians stood sculptural mannequins wearing creative clothes on pallets with handy wheels, so they could be rolled out of the space when the occasion required.

Looking through the various installations, comparisons with the Eurovision Song Contest are inevitable, so perhaps, given the contest’s recent history, the award goes to the Czech Republic for David Cerny’s 2009 Entropa , a mad map depicting Italy as a football pitch, the French on strike, Luxembourg for sale, Spain covered in concrete, Bulgaria as a toilet, Ireland as a bog, and the United Kingdom not there at all. Demonstrating a clear understanding of how such commissions work, Cerny had proposed that an artist from each member state would create the image of their own country. Instead, he invented his “collaborators” and did them all himself, with the help of some assistants.

Entropa was talked about across Europe, although it is arguable how much it actually did for the careers of Czech artists. If one part of the equation is to promote an image of a country, the other is to develop opportunities for that country’s artists.

Despite the Eurovision-esque nature of national presentations, artists are best served when nationality is ignored. Irish artists succeed internationally on the strength of their work, rather than where they come from.

The best support for Irish artists is through integration into the wider art worlds, which is what led Josephine Kelliher of the Rubicon to move her gallery to Brussels for the duration of the presidency. “It’s about making personal connections, opening networks, being present in new contexts in a way that people can understand,” she says. “This is what opens doors.”

Meanwhile, Changing States – an exhibition of work by Irish contemporary artists at the Bozar in Brussels, which was shown alongside photographs and artefacts from the studio of Francis Bacon – is excellent, not because it describes an Irishness, but because of the strength of the works within. And yet the temptation to bring it back to a specific culture is irresistible.

Herman Van Rompuy, President of the European Council, and a figure more closely associated in Irish media with fiscal issues, makes the attempt, writing in the introduction to the exhibition catalogue that the “artistic imagery of uncompromising vitality . . . reflects the turbulent history of Ireland, a state in constant flux”.

European identity is as complicated as national and individual identities are and, at their best, visual artists find ways to mine and explore the facets of being. To be Irish or European isn’t to be green, blue, shamrock-laden or technologically advanced.

But, as we are a small country, it is, as Kelliher described with the title of her opening exhibition in Brussels, to announce, unapologetically, We Are Here ; and to find ways of holding our own, of being present in the vast, faceless and sometimes hostile corridors of the superstructures of the EU.


Changing States runs at Bozar until May 19th, bozar.be. O Brave New World is at Rubicon Brussels until May 25th, rubicongallery.ie. The full cultural programme for the EU Presidency is at cultureireland.ie/eu2013

1 Two hundred Irish retailers for all your online Christmas shopping
2 Nine charged following clashes between gardaí, anti-lockdown protesters
3 Reasons to believe Covid-19 pandemic will ease next spring, says health expert
4 Six further outbreaks of Covid-19 in nursing homes and community hospitals, Nphet says
5 Large crowds gather on Dublin’s Grafton Street on eve of lockdown
6 Body of woman and baby boy found in separate locations near Lucan
7 Dáil approves transfer of mother-and-baby home records to Tusla
8 Life under Level 5: Where can I go, who can I see, what is closed and what is open?
9 Lockdown meals: 50 great Irish restaurant food boxes to go
10 People will need to get used to a ‘simpler life’ because of Covid-19, says prominent medic
Real news has value SUBSCRIBE