One person in every 122 forced to flee home, with Syrian civil war driving numbers 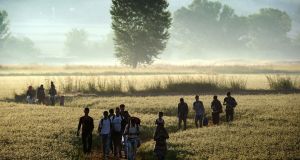 Migrants walking through a field to cross the border from Greece to Macedonia near the Greek village of Idomeni on August 29th. Photograph: Aris Messinis/AFP/Getty Images

The number of people forcibly displaced worldwide is likely to have “far surpassed” a record 60 million this year, mainly driven by the Syrian war and other protracted conflicts, the United Nations said on Friday.

The estimated figure includes 20.2 million refugees fleeing wars and persecution, the most since 1992, the UN High Commissioner for Refugees (UNHCR) said in a report.

Nearly 2.5 million asylum seekers have requests pending, with Germany, Russia and the United States receiving the highest numbers of the nearly one million new claims lodged in the first half of the year, it said.

“2015 is on track to see worldwide forced displacement exceeding 60 million for the first time – one in every 122 humans is today someone who has been forced to flee their homes,” it said. The total figure at the end of 2014 was 59.5 million.

An estimated 34 million people were internally displaced as of mid-year, about two million more than the same time in 2014. Yemen, where civil war erupted in March, reported the highest number of newly uprooted people at 933,500.

“Never has there been a greater need for tolerance, compassion and solidarity with people who have lost everything,” Antonio Guterres, UN High Commissioner for Refugees, said in a statement.

Syria’s civil war, which began in 2011, has been the main driver of mass displacement, with more than 4.2 million Syrian refugees having fled abroad and 7.6 million uprooted within their shattered homeland as of mid-year, UNHCR said.

Together, nationals of Syria and Ukraine, where a separatist rebellion in the east erupted in April 2014, accounted for half of the 839,000 people who became refugees in the first half of 2015, it said.

Violence in Afghanistan, Somalia and South Sudan sparked large refugee movements, as well as fighting in Burundi, the Central African Republic, the Democratic Republic of Congo and Iraq.

Voluntary returns – a measure of how many refugees can safely go back home – are at their lowest levels in more than three decades, with only 84,000 people returning by mid-year against 107,000 at the same time a year before, the UNHCR said.

Many refugees will live in exile for years to come, it said. “In effect, if you become a refugee today your chances of going home are lower than at any time in more than 30 years.”