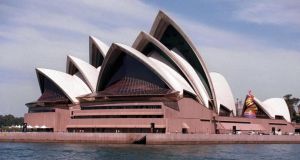 Sydney Opera House is among 136 sites that would be affected if current global temperatures rise three degrees in the next 2,000 years, according to new research. Photograph: AP Photo/Russell McPhedran


Some of the world’s most recognisable landmarks – from New York’s Statue of Liberty to Sydney’s Opera House – could be lost to rising sea levels if global warming trends continue over the next 2,000 years.

This is based on a study, published today in the journal Environmental Research Letters , which calculated the temperature increases at which the 720 Unesco World Heritage Sites would be hit by subsequent rises in sea level.

The Statue of Liberty, the Tower of London and Sydney Opera House are among 136 sites that would be impacted if current global temperatures rise 3C in the next 2,000 years – not a particularly extreme scenario, according to the researchers.

Also affected would be the city centres of Brugge, Naples, Riga and St Petersburg, Venice and its lagoon, Robben Island off Cape Town where Nelson Mandela was held prisoner, and Westminster Abbey in London.

Lead author Prof Ben Marzeion of the University of Innsbruck said the study assumed that a heritage site would be impacted when at least part of it is below sea level, although tides and storm surges may dictate whether it is protected before then.

Below sea level
The researchers calculated that 7 per cent of the world’s population would end up living below sea level with a 3C increase in average temperatures – more than half of those affected would be in China, India, Bangladesh, Vietnam and Indonesia.

Confirming the fears of small island states, the study also found that seven countries – including the Maldives, Bahamas and Cayman Islands – would lose 50 per cent of their land.
see iopscience.iop.org