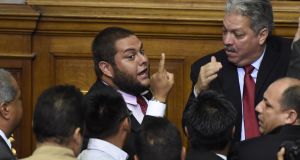 Newly-elected opposition deputy Juan Requesens argues with Chavista deputies during the new parliament’s swearing-in ceremony in Caracas: a Chavista-dominated court ordered the temporary suspension of the mandates of four new deputies, three from the opposition, after their victories were questioned by the ruling socialists. Photograph: Juan Barreto/AFP/Getty Images

Though his Chavista movement has lost control over a branch of government for the first time since Hugo Chávez was sworn in in 1999, Mr Maduro temporarily prevented the opposition United Democratic Table, or MUD, alliance exercising the two-thirds supermajority in the 167-member legislature it won at the polls.

This would allow it to severely restrict his executive powers and even push to hold a recall election on removing him from office. But a Chavista-dominated court ordered the temporary suspension of the mandates of four new deputies, three from the opposition, after their victories were questioned by the ruling socialists.

The court’s move, which leaves the MUD just shy of wielding a supermajority, was condemned by the deputy head of the national electoral council who said all 167 deputies should be sworn in immediately “without exception”.

The opposition had no difficulty in electing the new assembly’s president in a session during which pro- and anti-Chavista deputies swapped accusations and insults while outside the building their supporters held rival rallies.

Since his movement’s stinging defeat in December’s poll, Mr Maduro has sought to politically neuter the opposition which is riding a wave of popularity as the country’s poor turn on Chávez’s heirs, who are blamed for a collapsing economy, rampant corruption and one of the world’s worst murder rates.

He has already created a new rival “communal parliament” dominated by his Chavista movement and just before Christmas he packed the supreme court by having the outgoing assembly rush through the appointment of 13 Chavista loyalists.

Last week Mr Maduro used temporary powers to strip the incoming assembly of the right to vet new appointments to the central bank. He can now select the institution’s president and six directors without seeking the assembly’s approval.

The president also increased restrictions on access to economic information and the assembly’s ability to see confidential central bank documents as well as reserving the right to suspend the publication of economic indicators if he judges the country to be facing threats “to national security and to economic stability”.

Mr Maduro claims he is in an “economic war” with Venezuela’s business class, backed by external enemies including the United States. He has accused Washington of being behind the collapse in the price of oil, Venezuela’s only significant export, in order to undermine his regime.

The central bank changes will hinder efforts by the incoming assembly to change the economic direction of a country suffering from incipient hyperinflation and economic implosion despite possessing the world’s largest oil reserves.