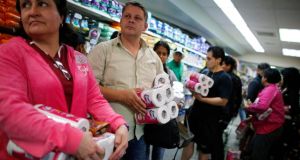 People queue to buy toilet paper in a supermarket in Caracas. Supplies of food and other basic products have been patchy in recent months, with long queues forming at supermarkets and rushes occurring when there is news of a new stock arrival. The situation has spawned jokes among Venezuelans, particularly over the lack of toilet paper. The government announced this week it was importing 50 million rolls to compensate for ’over-demand due to nervous buying’. Photograph: Jorge Silva/Reuters

With no miracle in sight, Roman Catholic churches are being asked to ration wine in the latest shortage to illustrate Venezuela’s economic troubles.

A shortage of wheat flour has also hit production of the bread used for communion, church leaders say.

“We’re asking the priests and bishops to ration wine and look for alternatives during this emergency,” said Jose Antonio Da Conceicao, a national church official.

Church leaders say the problem arose when the local supplier of the specialty sacramental wine used at Mass had a bad harvest. They turned to importers, but the companies told them it was impossible to obtain dollars to bring the wine into the country because of Venezuela’s strict currency controls.

That has been a common complaint of private businesses against Venezuela’s socialist government under late president Hugo Chavez and his successor, Nicolas Maduro.

Basic products, from dairy products to wheat flour and diapers to toilet paper, have been increasingly hard to find in Venezuela, causing long queues and even scuffles in shops.

Mr Maduro says right-wing opponents and unscrupulous businessmen are trying to sabotage the economy and his new administration by hoarding products. He has chastised Venezuelans for unnecessary “panic-buying” and met with business leaders to seek solutions amid widespread mockery over the shortage of toilet paper.

Meanwhile, the local Catholic Church has given priests permission to use different types of wine for communion.

“In extreme necessity ... they can provisionally use Chilean or Argentine wines of good quality - French, Spanish and Italian too, but they are very expensive,” said an internal church memo.