Zika virus: case through sexual transmission reported in US

The World Health Organization on everything you need to know about the Zika Virus. Video: WHO 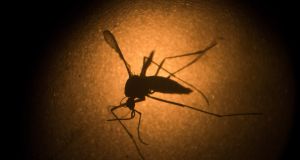 An Aedes aegypti mosquito, which carries the Zika virus, photographed through a microscope at the Fiocruz institute in Recife, Pernambuco state, Brazil. Photograph: Felipe Dana/AP

A case of Zika virus infection transmitted by sex, rather than mosquito bite, has been discovered in Texas. The Dallas County health and human services department reported that a patient with the Zika virus was infected after having sex with someone who had returned from Venezuela, where Zika is circulating.

After the report, the US Centers for Disease Control and Prevention changed its advice to Americans visiting regions in which the Zika virus is spreading. Men having sex after travelling to these areas should consider wearing condoms, officials said, although they did not indicate for how long this would be necessary. Pregnant women should avoid contact with semen from men recently exposed to the virus, federal officials also said. The agency plans to issue further guidelines soon.

Infection of pregnant women with the Zika virus has been linked to birth defects in their infants. But the infection is not usually life-threatening for others, and it produces symptoms only in 20 per cent of patients. But sexual transmission, experts said, adds a new level of difficulty to detecting and preventing Zika outbreaks, which may require not just mosquito control but also safe-sex education.

“This opens up a whole new range of prevention issues,” said Dr William Schaffner, chief of preventive medicine at Vanderbilt University Medical School. Still, he cautioned that sexual transmission is probably rare compared with the viral spread by mosquitoes, taking place in more than 20 countries and territories in Latin America and the Caribbean.

Scientists have suspected for several years that Zika could be transmitted sexually. In 2008, a malaria specialist who caught the Zika virus while gathering mosquitoes in Africa passed the infection to his wife shortly after his return to northern Colorado.

Because his wife had not left the state and there were no mosquitoes in the region capable of carrying Zika – and because the couple did not infect any of their four children – experts concluded the only logical explanation was transmission through sex.

Last year, French scientists described finding viable Zika virus in the semen of a 44-year-old Tahitian man who had recovered from an infection during a 2013 outbreak in French Polynesia. The investigators could not determine how long the virus had persisted because he had had more than one episode of fever that year that might have been related to the Zika virus.

The returnee from Venezuela had visible symptoms of Zika infection, a spokeswoman for the county said, but she did not describe exactly what they were. The health department did not describe the gender of each partner. The only two previously known cases suggesting that sexual transmission was possible involved men with visible blood in their semen, and scientists theorised that the virus had infected their testes or prostates.

In its statement on the Texas case, the CDC noted that there was “no risk to a developing fetus”, presumably implying that neither partner was pregnant. Although Zika virus infection causes relatively mild symptoms in adults, scientists suspect it is behind a surge in cases of devastating birth defects, including microcephaly, in Brazil.

Until Tuesday, the CDC had posted only a brief acknowledgment on its website that sexual transmission had “been reported”. There had been no mention of the possibility on its advisory pages for travellers, nor did it advise the use of condoms.

By contrast, British health authorities suggested last week that couples delay efforts to conceive for one month if either partner had just returned from a country where Zika was spreading. Public Health England suggested that all men use condoms for at least 28 days after returning, and that men with Zika symptoms, including fever, rash, red eyes or joint pain, avoid having unprotected sex for six months.

After nearly 40 years of studying the Ebola virus, doctors learned for the first time just last year that it could survive in semen for weeks or months and infect women through sex. The prospect of transmission from men who never had symptoms could pitch clinicians into uncharted waters.