What would Condoleeza say at Rutgers had she not been banned? 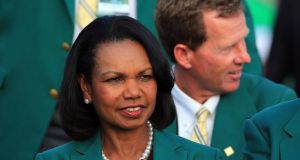 After protests about imperialism, Condoleezza Rice pulled out of her speech at Rutgers University. Photograph: David Cannon/Getty Images

There has been much mockery of political correctness run amok on college campuses this spring, with knots of know-it-all students and teachers knifing their commencement speakers.

The Times’ Timothy Egan dubbed the protesters “commencement bigots”, and the Wall Street Journal’s Daniel Henninger christened the trend the “Bonfire of the Humanities” – a “ritualistic burning of college-commencement heretics”.

The disinvitation list has been burgeoning. Brandeis University cancelled human rights activist Ayaan Hirsi Ali, saying she’d made remarks critical of Islam. After protests about imperialism, Condoleezza Rice pulled out of her speech at Rutgers and Christine Lagarde, chief of the International Monetary Fund, said au revoir to Smith College.

This past week, liberal Haverford College shooed away Robert J Birgeneau, the former chancellor of the University of California, Berkeley, “the big bang of political correctness”, as Henninger dryly noted, because Berkeley police had used “force” against Occupy protesters.

Jumping the gun
For a militaristic imperialist, Rice caved easily. She should have invaded Rutgers, occupied the podium and said her piece about her failures on peace. And the students shouldn’t have jumped the gun.

After all, there was always a chance – a small one, admittedly – that Condi Rice would have looked into her soul and told the story of what happens when you succumb to the temptation to sell it.

And that, dear graduates, family and friends, faculty and honoured guests, would have been the most amazing and instructive commencement speech of all time.

Rice always seemed to me a particularly sad part of the tragedies of Iraq and Afghanistan, and the lovely linchpin of the moral corrosion of George W’s presidency. “What a falling off was there,” as the ghost of Hamlet’s father said of his compromised queen.

Condi had all the qualities required to dazzle. Smart, attractive, hardworking, personable, chic. She grew up in Birmingham, Alabama, in the 1960s, when segregationists bombed so much that the city became known as “Bombingham.”

Yet she sailed to success at a young age. She could stand toe-to-heel on substance with world leaders. She could speak Russian competently and talk sports expertly, play the piano and ice skate beautifully. She could authoritatively survey the troops in Wiesbaden in black leather knee-high stiletto boots and fashionably dominate a Washington banquet in a scarlet Oscar de la Renta gown.

Women everywhere, including my mother, were blown away by her, believing that she could be the first woman and the first black person to be president.

So how could someone named by her mother after the Italian musical notation con dolcezza, meaning “with sweetness”, end up having such a sour effect on US history?

Rice was a star, but unfortunately she cast herself in yet another production of Faust on the Potomac, uttering one of the most over-the-top lines of war spin ever: “We don’t want the smoking gun to be a mushroom cloud.”

She excelled at failing better. As national security adviser for W, she ignored the intelligence report warning that Osama bin Laden was determined to strike inside the US. And she only learned about Hamas’ shocking win in the Palestinian elections in 2006 when she was on her elliptical trainer watching the television news crawl. After verifying it with state, she returned to exercising.

As Elisabeth Bumiller wrote in her trenchant biography Condoleezza Rice: An American Life, “It was obvious from Rice’s many metamorphoses that her real ideology was not idealism or realism or defending the citadels of freedom, although she displayed elements of all of them. Her real ideology was succeeding.”

Flying with hawks
In order to succeed, she rejected her old mentors, Brent Scowcroft and Colin Powell, and went along with the preposterous pre-emption plan of the old hawks who had far less respect for her: Dick Cheney and Donald Rumsfeld.

She knew that W – eager to show he was not a wimp, the word Newsweek had once hung around his father’s neck – was leaning toward kicking some Arabs around. So she ignored the red flags raised publicly by Scowcroft and privately by Powell and made her Faustian deal to sell a fake war.

We’ll never know if she could have stopped W from ruining his presidency and destroying so many lives when there was no national security stake.

We only know that when you sell your soul, it’s not like a pawnshop. Condi thought she could reclaim it after she was secretary of state and bring W back to the light of diplomacy and common sense. But, as Russell Baker once noted, she was trying to put the toothpaste back in the tube, spinning her wheels in the second term trying to undo the disasters of the first.

What a wonderful lesson she could have taught those graduates about the perils of succeeding at any cost, about how moral shortcuts never lead to the right place.

She should have said she was sorry about everything – except becoming one of the first two women permitted to join Augusta National.