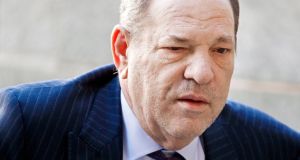 Harvey Weinstein arrives at court as the jury is set to deliberate for a second day in his sexual assault trial. Photograph: EPA

The jury in former Hollywood producer Harvey Weinstein’s rape trial resumed deliberations on Wednesday, as his lawyers failed in their effort to get a juror removed for writing a review of a novel partly set in the #MeToo era during the trial.

One of Mr Weinstein’s lawyers, Damon Cheronis, renewed a request he made on Tuesday to remove a juror from the case because of her online review, posted during the trial, of Kate Elizabeth Russell’s debut novel My Dark Vanessa.

The novel is about a relationship between a 15-year-old female student and a 42-year-old male teacher in 2000. In 2017, the former student is encouraged to come forward and tell her story, amid the #MeToo movement, in which women have accused powerful men in business, entertainment, news media and politics of sexual misconduct.

Justice James Burke denied the request. “My finding is just that she hasn’t done anything wrong,” he said.

The same juror wrote a novel about young women and “predatory” older men. The defence had tried to exclude her from the jury before the trial began.

Soon after they resumed deliberations on Wednesday, the jurors asked to review parts of Ms Haleyi’s testimony, as well as emails between her and Mr Weinstein.

After beginning deliberations on Tuesday, the jurors requested other evidence related to Ms Haleyi and to Annabella Sciorra, who testified that Mr Weinstein entered her New York apartment one winter night in 1993 or 1994 and raped her.

The accusation is too old to be charged as a separate crime, but it could act as an aggravating factor to support a predatory sexual assault charge, which carries a potential life sentence.

Since 2017, more than 80 women have accused Mr Weinstein of sexual misconduct. Mr Weinstein, whose films include The English Patient and Shakespeare in Love has denied the allegations and said any sexual encounters were consensual. – Reuters