Eyewitness footage captures the moment that survivors are pulled from a hotel in central Italy, they had been trapped by snow and debris caused by an avalanche for two days. Video: Reuters 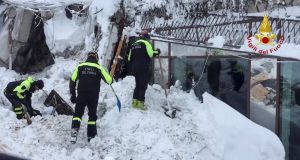 Firefighters work at Hotel Rigopiano in Farindola after it was hit by an avalanche. Photograph: Reuters/Vigili del Fuoco 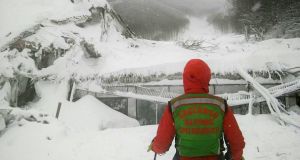 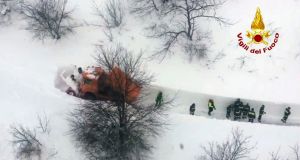 A snow-plough truck makes its way through high snow to attempt to reach the Rigopiano Hotel. Photograph: AP/Italian Firefighters 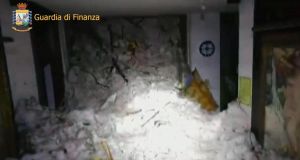 Snow fills up the interior of the hotel Rigopiano in the town of Farindola. Photograph: EPA/Guardia di Finanza 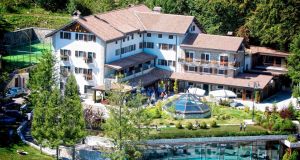 The four-star spa hotel prior to avalanche. Photograph: Hotel Rigopiano 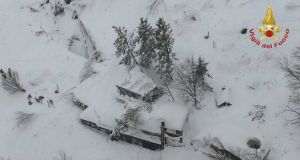 Hotel Rigopiano covered by the avalanche

Four children and a woman were pulled clear on Friday from the wreckage of a mountain hotel in central Italy flattened two days earlier by an avalanche, the national fire service said.

A further five people had been located, trapped under tonnes of snow and debris, and rescuers said they would work through the night to free them while the search continued for other possible survivors.

There were more than 30 people in the luxury Hotel Rigopiano on Wednesday afternoon when a wall of snow and toppled trees smashed into the isolated building. So far two bodies have been recovered from the site, officials said.

Fire service spokesman Luca Cari said an initial group of six people were found alive on Friday morning, with fire teams swiftly managing to pull two of them – a mother and her young son – to safety from a tangled mass of smashed concrete.

Rescuers clapped and shouted “bravo” as the pair were brought to the surface, led to nearby stretchers and carried by helicopter to hospital for a health check.

“They survived thanks to this bubble of air that formed inside the hotel,” said Marco Bini, a rescue worker from Italy’s finance police.

Shortly after the rescue a further four people were found trapped in the rubble and, as darkness fell over the mountains, three children were pulled to safety.

“They are all alive and well,” Mr Cari said. “The rescue operation is very long and difficult ... We are dealing with reinforced concrete that has collapsed.”

The disaster struck during a driving snowstorm, hours after four earthquakes with a magnitude above 5 rattled the region.

As much as 5 metres of snow covered much of what was left of the Rigopiano hotel, said Walter Milan, a member of the Alpine Rescue service at the scene. Only sections of the spa and swimming area were intact, he said.

Two men outside the hotel managed to escape the avalanche and raise the alarm, but the first rescuers only managed to reach the scene by ski some 11 hours later, with the access roads blocked by snow and fallen trees.

An investigation has been opened by a court in Pescara amid accusations that the emergency response was slow.

Giampiero Parete, a chef who was a guest in the hotel, had gone to his car to get headache pills for his wife when the avalanche struck. His wife and his eight-year-old son were amongst those saved on Friday, Italian media said. There was no word about the fate of his six-year-old daughter.

Mr Parete contacted his boss, Quintino Marcella, just after the avalanche hit, asking him to raise help. “He told me: ‘The hotel has collapsed’,” Mr Marcella said in an interview with RAI state TV, adding that the local prefecture did not immediately believe him.

He kept calling until he was assured help was on the way some two hours later.